The Church-Fortresses in Belarus comprise three 16th-17th century churches in the former Grand Duchy of Lithuania. They are built in the Belarussian Gothic style. They had a defensive role during war times, which is still visible in their thick walls and towers. 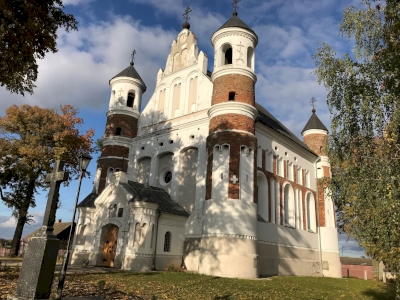 Still in October 2019 we continue our 6 days roundtrip of Belarus and found our first edifices church in the town of Kamai a little more than 2 hours southwest from Polatsk. It's Church of Saint John the Baptist.

On a Friday afternoon it's a sleepy little town, only a few raised eye browses on the market square met us.
We went up to the church just meteres from the square - seeing just another church! It was closed and not accessible except from the outside, though inside stone fence. It's a typical "normal church" from our point of view, the only difference we could see was in addition to "normal church windows" a set of small round windows as a set of loopholes on the round towers.

A couple of hours later the same day we visited the second church in the village of Murovanka. It's the Khram Rozhdestva Presvyatoy Bogoroditsy D.Murovanka.
This church was also closed and in addition it was also fenced with a closed gate, so this church we had to behold from a distance.
It's a nicer church than the first one and we even had some sunbeams, but that's all. The only "fortress" image are the towers, but it's not unusual having towers on a church?

We didn't visit the third one (Church of St. Michael, Synkavichy) but by seeing Walter's photo we can tell that the three are different, but still the same.

I'm sure they have a special history, but it's hardly great enough to be a worthy WHS. 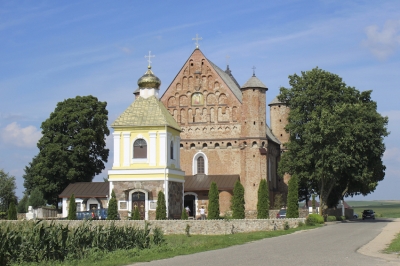