Historic quarters and monuments of Rosetta/Rachid

Historic quarters and monuments of Rosetta/Rachid is part of the Tentative list of Egypt in order to qualify for inclusion in the World Heritage List.

Rachid (anglicized: Rosetta) is a port city in the Nile Delta. It had its heydays in the Ottoman era, which can be seen in the remaining Ottoman-style mansions. However, it owes its international fame to the discovery of the Rosetta Stone at its citadel.

Map of Historic quarters and monuments of Rosetta/Rachid 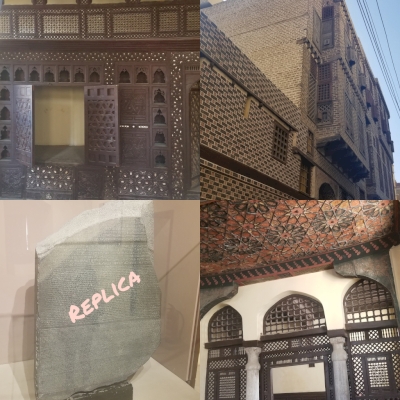 Rosetta (now called Rachid) is an hour mini-bus journey from the outskirts of Alexandria (getting into the bay area takes another 20min taxi for sure). It is mainly famous for the discovery of the Rosetta stone in 1799 which unlocked the understanding of ancient Egyptian by having one text in three different languages on the same stone (the others are Demotic script and Ancient Greek). It is now in the British Museum in London and unlikely to return to Egypt within this epoch. I would think most people see it in London. Instead, the Rosetta museum has a duplicate without mentioning it is one, some information about the discovery and a big bust of Pierre-François Bouchard. The rest of the museum is an old house but not as impressive as the newly restored ones a stone's throw away. If you thought coming to Rosetta/Rachid was for the stone then let me tell you that it is the least interesting part of the attractions on offer.

As I arrived the staff were concerned for my safety and found me a police escort to the old Ottoman houses. I wouldn't have found it myself anyway as it is not easy in all the small alleys, besides I don't even know the names of what I visited (I found the name Abu Shakhim online so that might be it, and the staff hinted that other houses are still under renovation). Part of it was a mill and the other a beautiful wooden house. The interior has been restored until recently and it was very much worth it. The ceilings are the best part, followed by the "walk-in closets" and the indoor balconies. Astonishing. I spent half an hour in a tiny house taking pictures of every angle. This was after I ran the ancient mill like a mule. The mill itself isn't anything special but makes for a nice bonus adjacent to the superior house. There are apparently a couple of other houses but as I didn't know the names I couldn't ask to be taken there. Instead the police arranged for an auto-rickshaw(tuktuk) to the bus station for a merely 5 pounds and I hopped onto the next mini-bus back to Alexandria. Those rides are cheap too at 21 pounds (US$1.20) one way rather than the ridiculous private car offers from the hotel ($100+). The bus is fast and safe, good condition and everyone is friendly. The guy next to me even spoke English very well. It really helps to have Uber or even better, Careem, on your phone to call a car after arriving at the station to avoid the touts. When arriving in Rashid there are many taxis at the bus station and cost ~15 pounds to the museum. If you want to save even MORE money then walk past them and find a tuktuk at the main road.