Fungal Flora of Bukovské Hills is part of the Tentative list of Slovakia in order to qualify for inclusion in the World Heritage List.

The Bukovské Hills are home to a rare species diversity in macroscopic fungi. These are mainly beech forests, with fungi on their fallen trunks and branches. The fungi species include critically endangered ones. 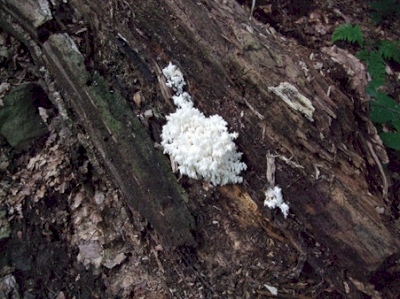 This is rather peculiar part of the tentative list of Slovakia without any “traces” of OUV. This nomination from 2002 focuses only on the fungal flora, i.e. macroscopic fungi = mushrooms, of Bukovské Vrchy National Park, beech forest of which has been already inscribed to the list as the transnational project, first in 2007. However, this TWHS nomination includes also other biotopes than beech forests, such as meadows and marches, and it encompasses much bigger area than the inscribed natural reserves.

The pristine forests with rotten woods are naturally perfect place for diverse species of fungal flora, and I could see quite a lot of rather unusual and attractive mushrooms during my numerous visits to the area (for example Hericium mushroom – PHOTO). But I could not see any uniqueness justifying the OUV. The strategy to inscribe the entire forest ecosystems is much more reasonable, and it worked already – see reviews on the beech forests WHS and its planned extensions.

Picking of mushroom is very popular in Slovakia and in Czechia as well, but I found popular edible mushrooms only in the shrubs and forests affected by human activity outside the strict natural reserves. Thus, picking does not endanger the rare species mentioned in the nomination text. Furthermore, they are mostly inedible and strange-looking. However, the mushroom of Hericium (PHOTO) is edible and excellent, indeed!