Susha historical and architectural reserve is part of the Tentative list of Azerbaijan in order to qualify for inclusion in the World Heritage List.

Susha is a strategically located, 18th century city in the South Caucasus. It was the capital of the Karabakh Khanate, until the Russian Empire took over. On 8 November 2020, Azerbaijani forces retook the city from Armenia during the 2020 Nagorno-Karabakh War. 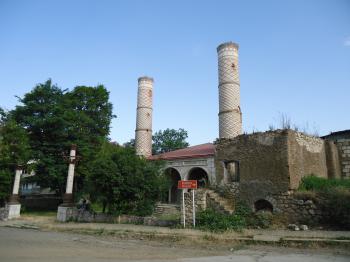 Currently in Nagorno Karabakh Republic, nonrecognized by any other country in the world (even Armenia). Susha was heavily involved in Armenian-Azerbaijan conflict (1992-1993) in Nagorno Karabakh region being a local Muslin (Azerbaijan) community in mostly Armenian teritory. During the fierce fightings the historic center was mostly destroyed.

In 2014 (July) when I was visiting the place the majority of Susha mosques lied in ruins together with plenty of Turkish (Azerbaijan) style houses. Most of soviet style buildings in the historic center (from 70-80 of XX century) were also destroyed (at least partly) while town walls as well as Ghazanchetsots Cathedral, Kanach Zham church and 2 others churches are rebuild.

A stroll throughout city streets is somehow depressing. Traces of war are visible everywhere. Big part of old town is still untouched as it was left alone in 1993. Only the ruins resembles the war. The upper part of the town (up from Ghazanchetsots Cathedral) is more rebuilt and vivid.