Triple-arch Gate at Dan & Sources of the Jordan is part of the Tentative list of Israel in order to qualify for inclusion in the World Heritage List.

The Triple-arch Gate at Dan are the archaeological remains of a Canaanite gate on Tel Dan in the far north of Israel on the border with Syria. The gate consists of three mudbrick arches constructed in the second millennium BCE as a defence for the Canaanite town of Laish. The Tel Dan Reserve is also the site of the source pools of the Dan, the largest of the three headstreams of the Jordan.

Map of Triple-arch Gate at Dan 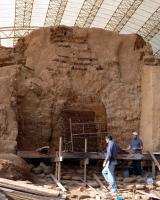 When planning our tour through Israel I decided early on to make the journey up to the far north to see the Triple Arch Gate of Dan. This, both for the “completeness” of seeing the country from the Biblical “Dan to Beersheba” and also to try to discover more about this T List site which remains mysteriously in limbo having been recommended by ICOMOS but not accepted by the WHC because of the lack of some documentation whose nature has never been officially clarified in WHC minutes!!

“2. Recognizes that the nomination entitled “Triple Arch Gate at Dan”, brings to the

Outstanding Universal Value on the basis of criterion (ii);

3. Refers the nomination entitled “Triple Arch Gate at Dan”, back to the State Party to

3. Requests the World Heritage Centre to facilitate the provision of the information

3. Postpones consideration of this nomination until additional information is received. “

So that’s perfectly clear then isn’t it!!!

When we arrived at the site we immediately discovered that the nominated area is merely a part of the much larger “Tel Dan Nature Reserve”. As its name suggests, this is primarily a natural site created in 1969 to preserve the area (which contains the source of the River Dan) in the face of growing Israeli water demands and which also contains some historic remains. Rather annoyingly from our point of view this meant that we had to take a 15minute walk back from the entrance area through groves of trees and alongside the babbling brook of the River Dan to a point which we had already passed outside the Reserve fence when driving in! All very pleasant but not what we had come for. It also became clear that within the Nature Reserve there are several areas of archaeological remains covering a long period of occupation. The first one reached during our walk was a gate and cultic area from the 1st Temple period (c850 - 586 BCE) known as the “Israelite Gate”. There is also an area just described as “Ancient Dan” and another which contains the remains of a shrine from the period of Jeraboam (c930 BCE). But none of these have been included in the nominated area which is limited solely to a small rectangle of .48ha within which stands the much earlier “Canaanite Gate” from the 18th C BCE. The entire Reserve has been designated as constituting the Buffer zone, plus, at the request of ICOMOS, a small area outside to the SE making a total buffer zone of 37.2 ha (according to the AB evaluation). Given this very limited area of nomination and the recent historical significance of disputes over water sources in the area (see later) I fail to understand why this site is still called “The Triple Arch Gate of Dan and Sources of the Jordan”!

The reasons for this very strict limitation of the area can be guessed at but I have not been able to discover any official statement. This limited area was nominated for criteria i, ii and iv but only satisfied ICOMOS on the basis of No ii, which related to the construction of a genuine “Arch” in sun dried brick which “bears witness to the early diffusion of the architectonic principle of the true radial arch in the Middle East during the middle and late Bronze ages, particularly in its most complete version including voussoir bricks for wide spans”. Indeed ICOMOS points out that the arches are not totally unique from the period (and earlier) but become so on the basis of their size and the use of the “voussoir” (wedge) – so the OUV of the nomination depends really on a rather specialized (albeit historically important) technical feature. Having come to this somewhat esoteric conclusion about the site’s OUV ICOMOS then rather surprisingly requests that “consideration be given” to the relationship of this limited nomination to the other nearby archaeological remains but leaves unstated on what basis this might be and certainly doesn’t suggest any OUV present among them!

It is perhaps worth mentioning that the excavations didn’t commence until 1977, the top of the first arch wasn’t even uncovered until 1979 and none of the 3 has been totally uncovered, so fragile is the nature of their construction material. A protective structure has been built over the entire gate and further protective work was ongoing whilst we were there. As a result, the site can really only be seen from the front (at which point barbed wire prevents any closer approach) – so you can see the steps up to the first arch and make out its “shape” within the facing “wall”. So fragile are they that none of the arches have been “freed” from the material which over the centuries came to “fill” them in. (photo)

So, having got to this most northerly outpost of Israel, walked for 15 minutes through a natural reserve and, finally, seen the outline of a historic arch from a distance, that was that and we could turn round and start driving to the nearby Golan Heights!! Except – what about the issue of the “legal and technical data” whose absence is apparently preventing inscription?? Well, I was under the impression that this was something to do with the definition of the buffer zone, the accepted boundaries of Israel and the unwillingness/inability of any party involved (including the UN) categorically to state where the boundaries were! At the site we asked the 2 Park Rangers what they knew – but they we unable to cast any more light. One interesting aspect which emerged from our tour of the site was the existence of a forward Israeli pill box and trenches on the Tell itself. This, it appeared, was established as the result of a conflict in 1964 when Syria tried to solidify its claim to a few metres of land in front of the Tell which would have given it access to water sources in the area. The dispute arouse because the original boundary between Palestine and Syria agreed between UK and France was designated by a pencil line on a map whose scale was such that this line represented 130 metres in width! Both Syria and Israel claimed the land represented by this pencil line.

I had originally thought that the dispute would relate to 1967 and the 6 Day war but it appears that the issue goes back to the original boundary of Palestine as determined by UK and France in 1923 followed by an adjustment in 1924 which placed Tel Dan and the Dan Springs in Israel. Then there were the issues arising out of the 1948 war and the 1949 armistice, compounded by jockeying over the next 18 years – and all this even before the 6 day war! There is quite a lot of background on the Web about all this – search for combinations of “Newcombe-Paulet”, “Dan, Israel”, “Water Politics” and “Pencil Line”!

Whilst some might claim that even the core area is not, de jure, part of Israel, the original problem does indeed seem to relate to the Buffer zone. I had always wondered why, in this case, Israel didn’t just reduce that zone to avoid the problem! Maybe they didn’t even want to give the impression that they might accept that it wasn’t part of Israel? But in fact it appears that they did make that change in 2010 – but even this must still have left problems. I found this (Palestinian) rebuttal of both the Israeli nomination and of the ICOMOS acceptance of many of the premises on which it had been developed - both the frontier but also the "land ownership" issue which may well relate to the WHC request for "Legal" data - http://www.plands.org/pdf/Canaanite%20Gate%20-%20Tell%20el%20Qadi%20(Dan).pdf

It says under Fig 1a –“The buffer zone presented by the State Party in February 2007 has an area of 37.2 ha. In February 2010, the State Party shrank the buffer zone to about 28 ha. The location of these buffer zones is uncertain. The above figure shows the best estimate of those two buffer zones.” I guess that, whatever Israel does regarding boundaries, won’t solve the basic problem of disputed frontiers/ownership and that the Triple Arch Gate’s inscription will just have to await a final resolution of all such matters and that is likely to be a very long way off.

"Requests the World Heritage Centre to facilitate the provision of the information which would enable the formal inscription of the property by the Committee at its 34th session."

ICOMOS in favour of inscription, overruled by the WHC

To present further information and legal and technical data

Withdrawn at request of Israel

Unesco Website: Triple-arch Gate at Dan & Sources of the Jordan

Triple-arch Gate at Dan & Sources of the Jordan (T)