Kekova is part of the Tentative list of Turkey in order to qualify for inclusion in the World Heritage List.

Kekova is a region that encompasses a small Mediterranean island known for its coastline and Lycian settlements. On the northern side of the small, uninhabited island lie the partly sunken ruins of Dolchiste, an ancient town which was destroyed by an earthquake during the 2nd century. The ruins of the ancient towns of Simena, Aperlae and Teimioussa can be found on the coastal mainland. 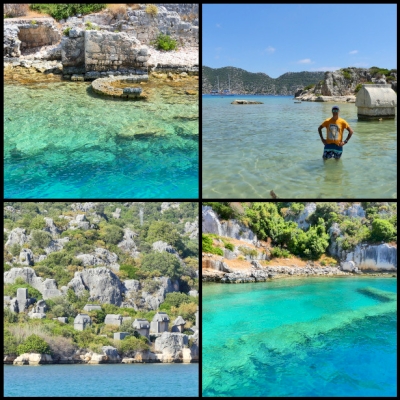 I visited this tWHS in Spring 2021. We opted for a full day private boat trip with Captain Durali. When we visited the departure point of Demre, exactly after recent COVID lockdowns, all boat trips were practically begging for tourists so we were spoilt for choice. I'm sure this is not the case in peak season, so booking in advance might be necessary.

We had agreed beforehand to focus most of our sailing time close to and around Kekova island, especially the area where there is the sunken city. The boat also had a small glass bottom area to spot some of the visible remains and amphorae on the seabed. The best time to visit the sunken city seems to be around noon when the sun shines bright on the crystal clear waters. We had already got good views by the numerous "drive-bys" but we decided to also go for a perspex glass bottomed kayak tour from Simeta to be able to see the remains from up close. Touristy but quaint Simeta would be ideal for a quiet stopover with its pretty castle and numerous Lycian tombs along the coast and one in the middle of the shallow sea.

On its northern side there are the partly sunken ruins of Dolchiste, an ancient town which was destroyed by an earthquake during the 2nd century. Rebuilt and still flourishing during the Byzantine Empire period, it was finally abandoned because of Arab incursions. At the northwest part of the island lies Tersane (meaning "dockyard", as its bay was the site of an ancient city Xera and dockyard, with the ruins of a Byzantine church).

We also stopped at a place known locally as Aquarium Bay where we were able to snorkel among the ruins and search for the few remains of mosaic floors in the sea. It was a memorable experience and a perfect cherry on the cake.

I don't know if this tWHS will ever make it on the list but it really was one of the many unexpected highlights during our road trip around Turkey.