The Tombstones of Ahlat

The Tombstones of Ahlat the Urartian and Ottoman citadel is part of the Tentative list of Turkey in order to qualify for inclusion in the World Heritage List.

The Tombstones of Ahlat comprise 6 cemeteries from the 12th-15th centuries. They include richly decorated tumulus-like graves, two-story grave towers and tombstones. Some are three meters high.

Map of The Tombstones of Ahlat 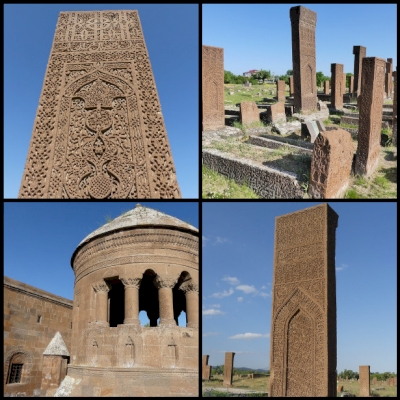 I visited this tWHS in Spring 2021 as a side trip from Van Lake, 42 km from Tatvan. The several ornately carved Tombstones of Ahlat were a very pleasant surprise. There are wooden boardwalks you can walk on which make it easier to visit and appreciate the different groups of tombstones and a quaint museum nearby.

The history of the city of Ahlat dates back to 900 BC, the Urartu era, but the tombstones are mostly from the medieval age, that is the 12th to 15th centuries. The city was left to Turkish rule by the local Byzantine governor in 1055. It was later used as a forward station by Alp Arslan forces during his successful military campaign against Byzantine Emperor Remenos Deogenes for the Seljuk control of Eastern Anatolia in 1071. The city was later seriously destroyed once during a capture by Celaleddin Harzemsah in 1229 and shortly after by a major earthquake. There are at least six ancient burial grounds in Ahlat that are the reminders of a long historical past and a glorious cultural heritage. The most important tombstones are in the cemeteries known as Harabe şehir cemetery, Taht'ı Suleyman cemetery, Kırklar cemetery, Kale cemetery, Merkez cemetery and Meydanlık cemetery. Among these, only the Kale cemetery has Ottoman tombs. The Ahlat graveyards were used by both the Seljuks and the Ottomans.

In all there are more than 8,000 graves (some still unexcavated), 1,500 of which are in perfect condition. The vast majority of the tombstones vary in height and are made of red tuff stone. On the vertical part of the tombstones are Rumi motifs, inscriptions, mihrab and Koranic verses as wells as hadiths. Engraved with intricate geometric patterns, bands of Kufic lettering and floral motifs, Ahlat's historic cemeteries are the largest Turkish-Islamic cemeteries and the third-largest Muslim cemetery complex in the world. The largest and most ornate vertical tombstones are engraved from both sides and are found in the main Meydanlik area, where there are also two lovely gonbads (Persian style domes). Ahlat was also a city of artisans and architects. The domed Seljuk mausoleums (kümbet or gonbad) and the shapes of the columns of the Orkhon Monuments, the oldest inscriptions in the Turkish language, were brought to Anatolia from Central Asia, producing their finest examples at Ahlat.

The Tombstones of Ahlat and citadel are unique and in quite a very good condition of preservation, especially since most of the tombstones have been recently cleaned from the different species of grey, green and orange lichens and fungi. In my opinion their OUV is evident and would fit well on the list to cover the Urartian period much more than the nearby Van Fortress and I hope they make it on the list in 2023. 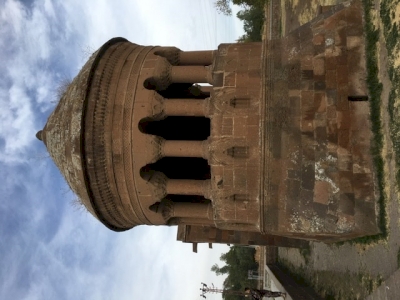 Ahlat is located in Turkey’s eastern province of Bitlis, west of Lake Van - or as it is called by the locals the Sea of Van - approximately 44 kilometres north of the town of Tatvan, from where it is possible to take a minibus.

In October 2018 we travelled there in about two hours by car coming from the city of Muş.  Ahlat is set in a dramatic scenery with mountains, steep valleys and the shores of Lake Van; it has the feel of an open-air museum with its pieces of art from several periods scattered across the landscape.  Ahlat, a small town of 20,000 people has much more to offer than the cemeteries it is known for.  It is a recent member of the Cittaslow network, promoting lifestyle and culinary delights.  Make sure you stay for lunch or dinner to enjoy food cooked from fresh local ingredients.  Ahlat, like so many places in Eastern Anatolia is renowned for its hospitality which we experienced first hand when by chance we met the deputy mayor of the town who immediately insisted to take us around the sites personally.

Ahlat was inscribed in the UNESCO’s temporary list in 2000 for its tombstones and gonbads (Persian-style Domes).  About 8000 monumental stones up to a height of four metres, some with Kufic inscriptions and floral motives, some without, and all made of volcanic red material found in the area, make up in six locations, on a surface area of 210,000 m2, what is one of the largest Muslim cemeteries in the world - and now largest cemetery in Turkey - used from the 11th to the 16th century by Seljuks and Ottomans.

When approaching the city from the west, not far from the main road there is a large 13th century tomb, the Ulu Kümbeti; soon you will see the tomb stones of the Selçuk Mezarlığı (Cementary) spread out over a vast area, among them the Bayındır Tomb and Mosque, a sturdy looking round building with a colonnaded terrace.  Closer to the town centre stands the Twin Tomb and further south, near the lake, the Ahlat Castle.   The nearby small museum was opened in 2018; it offers a modern display of artefacts from all periods with an emphasis on the battle of Manzikert, open 10 a.m to 5 p.m and closed on Mondays; entry fee TL 10 (as of 2020); address: İki Kubbe Mahallesi, İyiler Mevkii, Tatvan Yolu Üzeri  No: 292; e-mail ahlatmuzesi@kultur.gov.tr; tel. 04344124026.

Ahlat’s history begins much earlier, during the period of the Urartians; it was founded as a city during the reign of Caliph Omar in the seventh century, served as a military base for Arslan Alp on the eve of the battle of Manzikert (Malazgirt) in 1071, when the Seljuks defeated the Byzantine Empire, and reached its peak with about 300,000 inhabitants in the 13th and 14th centuries.

And there is more to see in the ‘neighbourhood’:  the spectacular Mount Nemrut (which should not be mistaken for the namesake UNESCO World Heritage site in Adıyaman) with its crater lake, the second largest in the world, at an altitude of 2,500 meters surrounded by small ponds with hot and cold water, ice caves and steam chimneys; other sites not to be missed are Adilcevaz, further east along the shores of the lake, with an important Seljuk fortress and mosque, and an Urartian citadel; further afield are the city of Van (on the eastern shore of the lake);  Akdamar island with its Armenian cathedral;  the battlefield of Manzikert and its Gates of Anatolia; Biltlis with its many historic buildings; and the ancient town of Hasankeyf now (at the time of writing in July 2020) sadly submerging in the waters of the Tigris river. 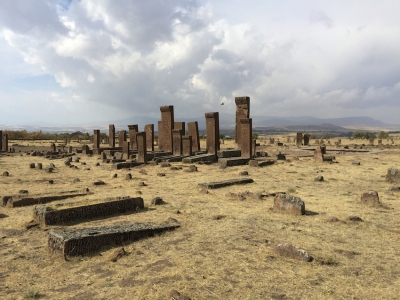 This site is scheduled for inclusion in 2020. It consists of six ancient burial grounds situated around the town of Ahlat, on the north-western side of lake Van. It is a 2 and 1/2 hours by car on a spectacular and perfect highway from Van town. Of the six cemetaries, only the biggest is well signposted, right at the entrance of the town. There is a brand new and informative museum next to it.

This main cemetary is called Meydanlik. It is enormous, with tousands of tombstones made of reddish volcano turf in the middle of a large huge field. I visited this site in october 2018. Walking around this vast was very atmospheric, reinforced by a stormy weather and many crows flying around the tombstones. I was the only visitor that morning, but there were several people renovating the tombstones (basicaly removing the lichen covering them). The tombstones breathtaking, as high as 4 meters, and richely decorated with geometric, vegetal and stylized scipts. On the horizon is Nemrut volcano.

I lacked any information about the 5 others cemetary, which are not signposted. There seem to be much smaller and much less imporessive than Meydanlik.

Entrance is free for the cemetary, 6 lira for the small museum (worth a look to better understand the area).  Taking photos is not allowed, and reminded upon entrance. Well, on a 2 km long field, this rule is a little difficult to enforce, and I still did take some picture.

Ahlat city dates back to 900 BC (the Kingdom of Uratu). The tombstones date from the 12 th-15 th centuries AD, time of Ahlatshah dynasty (a turkmen local kingdom associated to the Seljuk). Only the one cemetary has Ottoman tombstone (Kale cemetary in the ruins of the Ottoman castle). The name is therefore a misnomer (as tombstones are neither Uratian, nor Seldjuk, and barely Ottoman).

This site is really interesting, and very worth the visit, and to my opinion, has it's place on thw WHL.

Around Ahlat town, kumbet are scattered around. Those are domed Seljuk stone mausoleum. Of the original 100 kumbets, only 15 are still standing. They don’t seem to be part of the project, but are worth a look while in Alhat.

Unesco Website: The Tombstones of Ahlat the Urartian and Ottoman citadel