Maaloula is part of the Tentative list of Syria in order to qualify for inclusion in the World Heritage List.

Maaloula is a village of Aramaic origin. It is one of three remaining villages where Western Neo-Aramaic is spoken. Christian martyrs found refuge in its caves and a first Greek Orthodox Convent (St. Thecla) was built here. The Convent of Saint Sergius and the adjoining church were added at the beginning of the 4th century. There are also the remains of numerous other Christian monasteries, convents, churches, shrines and sanctuaries, and the place remains a piligrimage site. 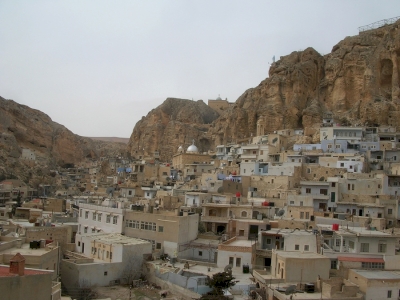 Visited Feb 2007. Maaloula is less than an hour by minibus from Damascus but I made an overnight trip of it, staying overnight with the nuns in the Convent of St. Takla and woke to a light dusting of snow the next morning. Maaloula's small population and relatively isolated location have helped it preserve much of its history and local culture. The monasteries and churches here are among the oldest in Syria and contain some of the oldest Christian icons in the world. The village is also one of only 3 left that still speak Western neo-Aramaic, perhaps the closest remaining language to that of Jesus. While visiting one of the local churches I was able to hear the Lord's Prayer in Aramaic which was a pretty amazing experience even for someone generally inclined toward religious cynicism. The village is backed against a mountain/cliff and homes are built so close together and nearly on top of each other that the "streets", which are little more than footpaths are often tunnels passing beneath the homes built above.

There is plenty to be said about how Syria has been run in the last few decades but Maaloula also struck me as a good example of how tolerant the country was of its historical and cultural diversity at the time. Much more than I had expected for the region. I hope the village hasn't suffered too much through the civil war but I doubt many will be visiting any time soon. Even then, I was the only foreign tourist during my visit.