The town of Melnik and the Rozhen Monastery

The town of Melnik and the Rozhen Monastery is part of the Tentative list of Bulgaria in order to qualify for inclusion in the World Heritage List.

Map of The town of Melnik and the Rozhen Monastery 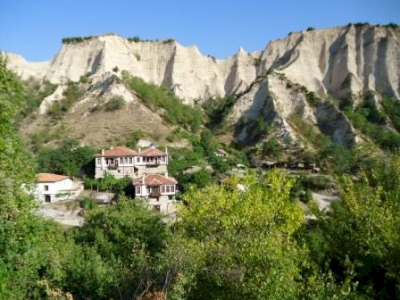 I was visiting the place in August 2011. Melnik is considered to be the smallest town in whole Bulgaria and it may be true. It is very small, according to different sources population is less than 300 people. It is beautifully situated in the valley surrounded by what is called Melnik pyramids (rocks in the shape of pyramid) nice town, entirely devoted to tourism (hotels, inns, restaurants and museums). Houses are typical for the region (similar can be found in Ochrid, Berat, Gjirokaster or Safranbolu) but unlike the other regional UNESCO cities there are no mosques in Melnik (just churches and remnants of the castle, nice views of the whole city, photo attached).

Rozhen Monastery is located some 6 km from Melnik. Not far but it is better to have your onw transport. Monastery can be visited free of charge. It is a typical Balkan medieval monastery, quite similar to those of Macedonia, Greece, Serbia and other places in Bulgaria. Nicely preserved and perfectly maintained (monastery is still in use, appropriate cloths are welcome). Built in 13 century AD but altered later on (mostly in 18-19 centuries AD). On the road from Melnik as well as in the are around there are famous Melnik Earth Pyramids, natural shaped rocks.

I stayed overnight in Rimski Most hotel (around 20-25 USD per double) but there are plenty of other options in the town.

Unesco Website: The town of Melnik and the Rozhen Monastery