2014 marks 100 years since the start of the First World War. We have identified eight WHS that have been Damaged in WWI. I wondered what exactly happened to them between 1914 and 1918.

In Dendermonde (one of the Flemish Béguinages), the entrance gate, several houses and the Beguine church were burned down by the Germans in 1914. All beguines had already left when the war broke out 1. 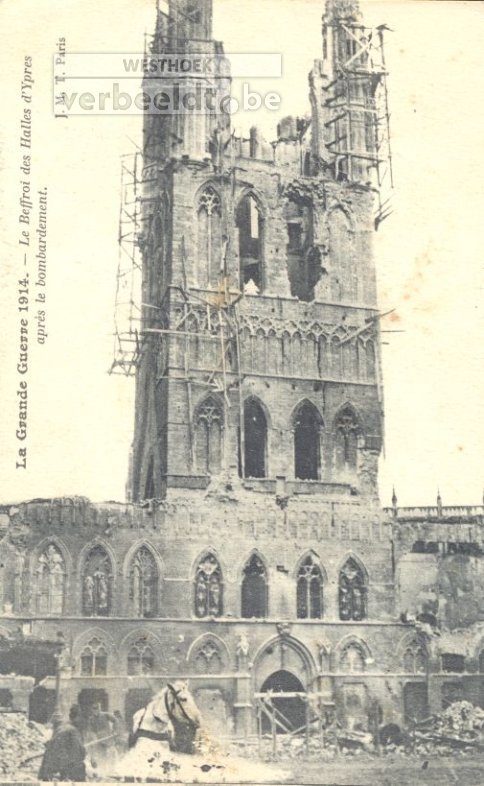 Several of the Belfries of Belgium and France were located right in the middle of the battle front between the Allies and the Germans: - The clockwork of the Sint-Romboutstoren in Mechelen was damaged by a German canon in 1914. - The Belfry of Ypres was burned down early in 1914, the Cloth Hall was reduced to rubble during the 4 year siege of the town by the Germans. - The Belfry of Arras was destroyed in October 1915. - The Belfry of Amiens lasted until the Battle of Amiens in August 1918.

The nearby Nord-Pas de Calais Mining Basin had been cut in two by the Front, and the Germans flooded the eastern section. "The final blow arrived in 1918, when the Germans, facing defeat, decided to destroy the coalfield because it was economic tool vital to France, and all the pits of the Escarpelle, Aniche and Anzin companies were in turn methodically demolished in a few days."2.

The city of Reims was conquered and severely damaged by the Germans already in 1914. The ruined Reims Cathedral became one of the central images of anti-German propaganda produced in France during the war, which presented it, along with the ruins of the Cloth Hall at Ypres and the University Library in Louvain, as evidence that German aggression targeted cultural landmarks of European civilization 3.

Scottish St. Kilda saw some skirmishes at the island of Hirta, where the British Navy had erected a signal station at the beginning of the war. On 15 May 1918, a German submarine started shelling the island. Seventy-two shells in all were fired and the wireless station was destroyed. The manse, church and jetty storehouse were also damaged but there was no loss of life 4.

Various Polish Wooden Tserkvas were located near the Eastern Front where Austria-Hungary met Russia. The Bell Tower of the Tserkva in Chotyniec was destroyed during the retreat of the Russian Army. In Uzhok the tower bells were requisitioned by the Austrians. War memorials can be found next to the tserkvas in Uzhik (a stone pyramid) and Owczaryon (a cemetery where 74 Austro-Hungarian soldiers and 8 Russian soldiers are buried).

The Mehmed Pasa Sokolovic Bridge in Visegrad (now Bosnia Herzegovina) is closely connected with the conflict that set fire to WWI: the Assassination of Archduke Franz Ferdinand in Sarajevo, after which Austria-Hungary declared war on Serbia. In 1914-1915, piers 3 and 4 of the bridge were blown up with dynamite by the withdrawing Austrian Army. In 1916, another pier was destroyed by the then retreating Serbian Army. Both incidents show the war-time strategic importance of the Bridge and the road across.

Probably the least likely victim on this list is Gonbad-e Qabus. This tower lies in the north-east of what is now Iran. Russian troops had occupied the region in the early 20th century, based on the security situation of Armenian and Assyrian Christians in Persia. Here they came to confront the Ottoman Empire in the Persian Campaign. Some 1500 bricks of the tower were broken or dislocated because of the bullets fired at the site. Also some of its inscriptions were damaged.

There is a further (9th) WHS which was "damaged" during WWI - the inscribed area of the Dolomites.
The area was the front line in the war between Italy and Austria-Hungary and contains many remains of that campaign
a. Vie Ferrate built to enable troops to traverse the area
b. Remains of Gun emplacements, hospitals and trenches
c. Tunnels built both for protection but also as methods of attack by placing large amounts of explosives under opposing troops.
In case it is said that none of this actually represents "Damaged in WWI" it could be argued that even trenches and gun emplacements represent "damage" in this previously pristine environment. However, even beyond these, there are genuine "scars of battle" which remain to this day e.g on Lagazuoi an enormous explosion left a crater which is still visible.
In the Nomination File some of the aspects are described in pages 93-5
"Due to its position between the Austro-Hungarian Empire and the Kingdom of Italy the Dolomite quadrant became the territory of an heroic but bloody battle indelibly scored, not only in the memory of the populations involved, but also on the summits and peaks which literally carry the scars of this terrible mountain war." -."The first battle lines, corresponding to the peaks and crests of the mountains, were fortified with complex systems of tunnels, trenches and underground passages for many kilometres, often excavated with the help of pneumatic drills or mines. Daunting cableways were built next to these, allowing access to the highest peaks. Many mule-tracks and military roads were built in the same way, still perfectly efficient today, giving access to the heart of the main mountain groups (e.g. Sesto, Marmolada, Tofane, etc.). Some of these military postings were later adapted into refuges (e.g. Lagazuoi refuge from a former Austrian posting and A. Bosi refuge from the Italian military command) as historic evidence." - "The events which cost the lives of thousands and literally devastated the mountain skyline (the Col di Lana and Lagazuoi peaks were blown up by mines), have become history and traces of this international tragedy can still be found in the places themselves (fortifications, trenches, mule-tracks and roads)"
Some links -
http://thesevereclimber.com/2013/04/14/wire-and-war/
http://www.holimites.com/en/discover-the-dolomites/history-and-culture-005/the-great-war-in-the-dolomites-007
ANSA.it - DOLOMITES-UNESCO: A FIRST WORLD WAR BATTLEGROUND