Historic Centre of Tchernigov, 9th -13th centuries is part of the Tentative list of Ukraine in order to qualify for inclusion in the World Heritage List. 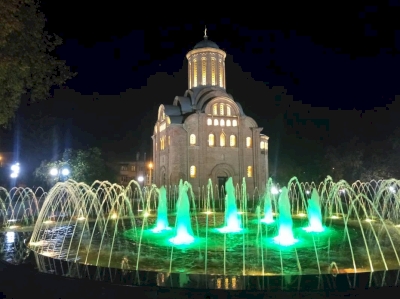 I visited Chernihiv (Chernigov in Russian) in December 2017.

The provincial city of 300,000 people 100 miles north of Kiev was surprisingly modern, well, at least the center was. It was filled with pleasant cafes and was completely devoid of the physical turmoils in the east of the country or the political one in Kiev, at least to the eyes of this foreigner who stayed there only for 3 nights.

But this is a very historic city. In fact it's so much so that I'd call this city Ukrainian equivalent of Veliky Novgorod in Russia, which I have visited twice before. Indeed both cities played major roles in the formation of Kievan Rus in the 9th century, which is the predecessor to both Ukraine and Russia of today, and come with the oldest church in both of these countries.

As such, all the main attractions of this city are religious edifices, the concentration of which also reminded me of Novgorod.

The UNESCO web page mentions only two of these edifices, but I'm assuming that the nomination covers all or part of the historic center, not just two churches.

Of the two, the one in the photo is the Cathedral of Transfiguration, regarded as the oldest church in Ukraine.

I also visited other main attractions, including the Cathedral of St. Catherine, the Cathedral of Holy Trinity with a belfry, which looks magnificent at night, and the Chruch of St. Elijah adjoining the Cave of St. Anthony.

How to get there from Kiev:

I took a train from Kiev to Chernihiv. 15 min. before the departure at the Kiev train station I was told that all tickets were sold out, so, as is usual in this sort of case in Ukraine (and in Russia), I rushed to the train to bribe the conductor welcoming passengers, or rather, waiting to be bribed. "I don't have a ticket." "Money?" "Yes, how much?" "1000 Hryvnia." You should always bargain. "I have only 600 Hryvnia." "Get on." Then he unlocked for me an empty compartment, which had perhaps been reserved for bribers. When he came to collect the money after the train departed, however, I was surprised that he actually asked only for 100 Hryvnia (4 USD), which is the normal price for the ticket. Well, maybe things are finally changing in Ukraine. (The train was going all the way to St. Petersburg, so I am not sure if he was a Ukrainian or a Russian conductor.) It took 3.5 hours to get to Chernihiv.

How to get back to Kiev:

On the way back I took a mini bus, also for 100 Hryvnia, from the center of Chernihiv, and was dropped off right outside the Lisova metro station in Kiev. It took less than 2 hours.

So in fact taking this mini bus is easier to move between the two cities.  You can find this mini bus (that leaves at least every 30 min.) outside the Lisova metro station without much hustle.