The Ancient Walled Oases of Northern Arabia is part of the Tentative list of Saudi Arabia in order to qualify for inclusion in the World Heritage List.

The Ancient Walled Oases of Northern Arabia comprises 4 millennia-old archaeological oases sites. They show extensive forms of water management and cultivation techniques. The walls were built against intruders, but also against natural forces such as flooding and wind.

Map of The Ancient Walled Oases of Northern Arabia 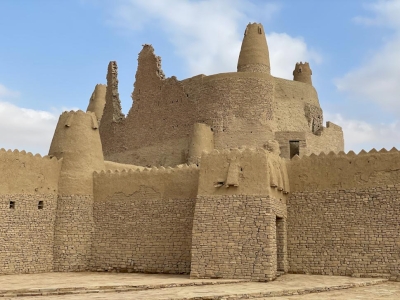 From the petroglyphs and Ha'il, it's another two hundred kilometres to of Dawmat al Jandal. It's not very touristy, but it was the largest town on the way to Tabuk with several hotels to choose from. Overall, as far as Saudi Arabia is concerned, the north of the country, specifically these parts, aren't very busy - the petroglyphs are usually the northernmost the average tourist will go.

Dawmat Al-Jandal was nominated quite this year under the name Ancient Fortified Oases of Northern Arabia, along with Tayma, Qurayyah and Ha'il. Dawmat (or Dumah) Al-Jandal was located on the trade route connecting the Gaza Strip and the Arabian (or Persian) Gulf and Babylon. According to historical sources, this place was inhabited as early as the first millennium BC. It was plundered by the Assyrians in the seventh century BC and was inhabited by the Nabataeans in the first century AD, then by the Romans. The city also bears Byzantine and Islamic influences.

The main monument is the stone castle of Marid, which gave the city its name - Jandal means stones. The castle is said to have been built by the Nabataeans (a civilization to which we owe the Jordanian Petra and the Saudi Hegra, more on them in a later article) and has been rebuilt many times throughout its history, thanks to both the Ottoman Turks and the city's later inhabitants. Today it is an interesting archaeological complex, besides the castle there is a preserved village with a mosque and wells. There is a museum nearby, it was closed at the time of our visit so we simply parked on the roadside by the archaeological complex and walked in. We said hello to the guard, who asked where we were from and to our surprise he immediately responded "Oh, yes, Slovakia! Hamsik!" He then explained in broken English that the castle itself was inaccessible as the stone walls had pieces falling off them, and apparently they had had accidents there (hopefully no tourists had gotten hurt), but we could see the mosque and parts of the fortifications.

Once again, quite an empty site all for us to explore. It was interesting and we got some nice shots. Unfortunately, the signposts were in Arabic only, so Google Translate came to our help. A pleasant visit with access to many parts of the site and no entrance fee as a bonus. 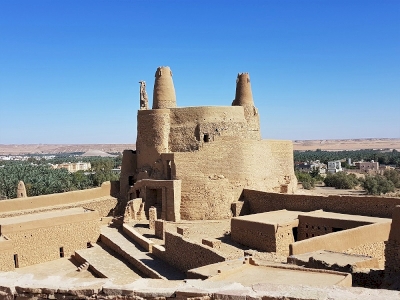 After visiting the wonderful WHS Rock Art of Hail, instead of going straight to Al-Ula, I headed north to the town of Dumat Al-Jandal. Dumat Al-Jandal is only 260 kilometers from Jubbah of desert and, as I can say, there was probably not a single gas station between these cities. There were spectacular dunes and a road as straight as a table.

Dumat Al-Jandal is a place with an extremely rich history. It has been inhabited since at least the 8th century B.C.E. and is mentioned in the Assyrian chronicles and (possibly) the Bible. In Roman times, the town was a border post of Arab Limes, and then an important city of pre-Islamic and Islamic empires. Muhammad obtained it as early as 626 AD, that is 4 years after the famous victorious escape to Medina.

Today Dumat Al-Jandal is a small town, completely overshadowed by the much larger Sakakah. The city's splendor is reminiscent of the old quarter, perhaps the most atmospheric place in all of Saudi Arabia. It consists of three important points - the Marid castle, the Umar mosque and the old city of Al Dari. Intensive reconstruction work is being carried out on site with the participation of Italian archaeologists - I tried to start conversation, but they turned out to be not willing to talk. Most of the work has already been done and it looks great - while walking around the castle or the streets of Al Dari (as usual in Arabia, completely alone) I felt as if I had been moved back in time by two thousand years. Great place, number one for me on the Saudi T-list.

On the way to Al-Ula I passed Tayma, another site covered by this proposal. However, during my visit (November 2022) the TWHS was limited only to Dumat Al-Jandal, so I skipped archeological remains of Tayma.

Includes Dumat al-Jandal and Tayma, which were on its first and very extensive tentative list from 1988