Zerzevan Castle and Mithraeum is part of the Tentative list of Türkiye in order to qualify for inclusion in the World Heritage List.

At the Roman built Zerzevan Castle an important Mithras temple has been discovered. It was located underground. It shows the spread of this originally Persian cult among Roman soldiers. The military settlement also held underground water cisterns, rock tombs and 2 Christian churches.

Map of Zerzevan Castle and Mithraeum 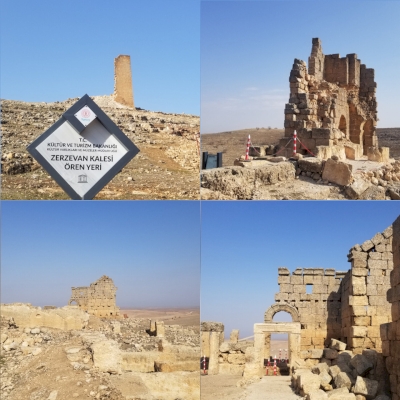 I'm not a fan, and not just the site but also of the idiot who designed a roundabout on the highway that if you are heading back to town you either have to drive the wrong way for a long time or you do the smart Zoe thing and slowly drive against traffic on the shoulder to reach that roundabout and go the correct way - something you learn in Thailand. You'll know when you see it!

For one most stuff up here is in rubbles and I can't say it's put back together quite well either. Second, Mithras temple is off limits so you don't even get to see what is apparently the best part. It's all free to visit but surely doesn't excite anyone if you passed through Turkey seeing better places which you undoubtedly did.

It makes for a decent hike around the hill and the few billboards give some idea why it's important to see but it just doesn't cut it. 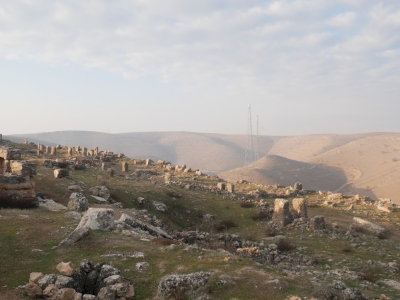 I had stayed in Mardin for two nights and was going to Diyarbakir, as the last step of my Turkey trip in January 2021. Zerzevan Castle lies along the road connecting the two cities; not coincidentally, as the modern road follows the ancient trade route. In antiquity, this was the border region between the Roman Empire and first the Parthians and later the Sassanians. Looking at the geography you quickly understand why. South of Mardin, you leave the mountains of Anatolia and reach the plains of Mesopotamia. This is a natural frontier.

As such, the Romans needed fortifications. Zerzevan was built in the 4th century CE on a hilltop overlooking the historic trade route. The term castle is a bit misleading. It's a Roman fort with a town including a canal, a basilica, town houses and most notably an underground Mithraeum. As such, it's way larger than the single picture of the iconic tower suggests. Excavations are still ongoing and it will be interesting to see how much more they unearth.

I arrived in the early morning by cab. Climbing up the hill, I felt a bit reminded of Macchu Picchu, as the rising sun painted the site in great colours. I would recommend arriving early.

I will go out on a limp and say this will pass flying colours. The scope is clear, the remnants are great as is the scenery. With the underground Mithras temple (off limits) it also has a unique spark. And unlike many inscribed sites I have seen in Turkey, this tentative site is already tourist ready with proper signs and paths set up. Only questions the Turkish authorities should consider is whether to include nearby Dara, another Roman border fortification.

Zerzevan is on the road between Diyarbakir and Mardin. There are dolmus connecting both cities and there is even a bus hut along the main road. I couldn't work out where the dolmus are in Mardin and ended up taking a cab (<20EUR). The dolmus certainly do not leave from the otogar where I went first. I think it's on the North Western side of town, but please ask.

Entry to the site is free and you don't have to worry about entry times. However, several parts are off limits for visitors and you should respect this as excavations are still ongoing.

Plan was to leave by minibus, but this being Kurdistan I got offered a ride without even asking. He let me off in Diyarbakir at the junction for the bridge (Ongözlü Köprü). I was going to walk, but I got offered another ride pretty much immediately.