Phnom Kulen: Archeological Site/Ancient Site of Mahendraparvata is part of the Tentative list of Cambodia in order to qualify for inclusion in the World Heritage List. It is a proposed extension of Angkor WHS.

Ancient Mahendraparvata was a large Khmer settlement and religious complex in the Phnom Kulen mountain range. It dates from the 8th-9th century. The site was also a sandstone quarry for Angkor. The extent of the city was only uncovered in 2012 with the aid of the scanning technology LIDAR. 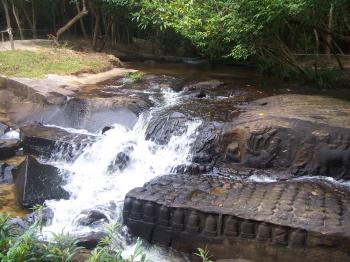 I visited the site of Kbal Spean, or the River of 1,000 Lingas which is included in this batch of monuments. It was a really rewarding place to visit as one of the outlying Angkorian monuments and made a great morning trip when combined with the magnificent Banteay Srei temple.

Here the river bed is carved with multiple representations of lingas and yonis as well as several other carvings on the river banks. These were used to symbolically purify the water flowing into the central temple complex of Angkor. It is a pretty impressive spectacle and the carvings continue for about 100m downstream of the first batch at the top of a waterfall.

It takes a little while to get out to the site from Siam Reap, and once at the site there is a 1,5km walk from the car park. It is a pretty nice walk, although some bits are a little tough as you clamber over rocks.

I guess if this was ever added to the list it would be as an extension to the WHS of Angkor, however if any site on the world heritage list deserves to be inscribed twice it is Angkor. So I would fully support it being added separately.