Grobiņa archaeological ensemble is part of the Tentative list of Latvia in order to qualify for inclusion in the World Heritage List.

Grobina’s remains of a settlement and burial sites represent the interaction between Viking Age Scandinavians and local Curonians. Located at the east coast of the Baltic Sea, it was the first territory where Scandinavians arrived and settled. The archaeological site comprises four burial sites and a hillfort. 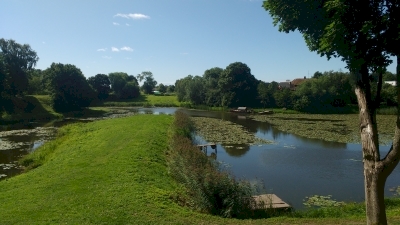 August 2017 - actually we planned a trip through the baltic states with our old campervan. Halfway on the way to the ferry, the Engin started striking, eventually we had to be brought back to Berlin and leave the car in front of the car repair, it would take some weeks. Luckily we could rebook the ferry so we started the trip with a small car and tent a day later. After 28 hours on the baltic sea we arrived in Liepaja. We found a nice campground just north and visited the town next morning. That day we wanted to arrive in Jurmala going through Kuldiga. Grobina is just a few km east of Liepaja so we decided to stop here. Nice idea to make a joint Viking sites nomination, but as a Stand alone, it doesnt seem to be very significant. We saw some dragonboats on the swamp, visited the nearby church and resumed our trip to Kuldiga