Asbads (windmill) of Iran is part of the Tentative list of Iran in order to qualify for inclusion in the World Heritage List.

The Asbads (windmills) of Iran comprise windmills in the east of the country. They are of a different type than the European ones, rotating around a vertical axis. Made of six to 12 sails covered in reed matting or cloth material, these windmills were used to grind grain or draw up water. In the 11th century this technique spread to Europe. The most notable remaining example can be found at Nashtifan windmill complex.

Map of Asbads (windmill) of Iran 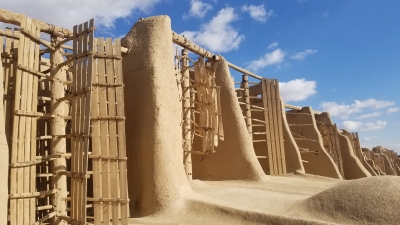 Let's go see windmills! You mean the Netherlands? Noooo...the original windmills in Persia! There is some debate whether or not the Eastern Persian horizontal windmills inspired European ones but the invention certainly made their way East. This makes me want to inscribe it immediately. But wait, if these windmills are so old then why does the wood look like it was freshly cut last month and the houses don't look rundown like the other old historic towns made in mud-bricks?

Here lies probably the biggest problem with the inscription attempt: authenticity. One gets a strong feeling that these are the 40 odd windmills are here for demonstration rather than the originals. The houses were heavily rebuilt. The technique is there but the mud-brick and wood is surely not old enough to warrant it special. This feels like an open-air museum.

How to get here? It's far off the beaten track in eastern Iran, but has another tentative listing nearby to get some activities done in between all the driving. The town of Nashtifan is nothing to look at. It was a Friday, weekend, and many folks about climbing around the buildings. The doors were mainly shut although that could have something to do with the weekend. The documentation speaks of it still being operational but I saw no signs of that in this area of the town. Maybe these are just for show. Just my luck that the winter afternoon gave me a perfect blue sky and no winds to see if these still turn.

Whereas I feel accomplished seeing it, learning something after looking up the windmill history, there should be some more work done to preserve the old windmills rather than showing us how they work based on what I shall call replicas. I suppose Shirakawa-go replaces the roofs all the time too and it's the norm, and the windmills at the kinderdijk need maintenance, just don't make it so obvious.