Sultan Bayezid II Complex: A Center of Medical Treatment is part of the Tentative list of Turkey in order to qualify for inclusion in the World Heritage List.

The Sultan Bayezid II Complex was an early planned medical center in Edirne. It had a holistic approach for physical and mental ailments, with attention to ventilation, lighting, gardens and a music stage. Traditional methods like water and music therapy were combined with medical and surgical interventions. 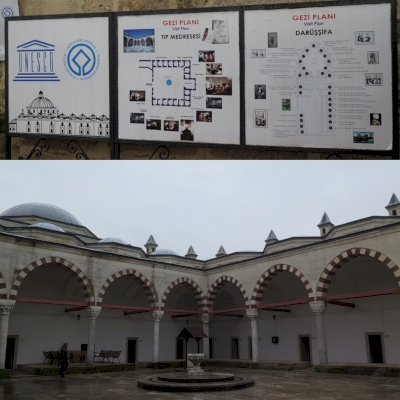 Welcome to the world heritage site of ...whaaaat wait why are there UNESCO symbols on the maps and signs? Someone surely thought they can place themselves onto the inscribed list without going through the entire process. Funny that since I didn't even see any sign at the Selimiye Mosque nearby. Maybe someone switched the sites secretly :)

I almost walked directly into the mosque but the stall keeper pointed me to the museum entrance 30m further down. The area is divided into two parts: the hospital and the study/admin areas. The latter is the more aesthetic one built as a medium-sized courtyard and many side rooms. Not all the rooms are open and the ones that are contain mannequins and replicas of what was once in the study rooms. The other side of the museum has the same kind of mannequins to attempt to make the pale rooms interesting, but I find that more laughable especially the "insanity" room. Many plaques describe the way the hospital was run and procedures, how many staff were in the hospital and what the rooms were used for. It is nothing special but they try to give you as much info as they can probably squeeze out of what is in my opinion just an old hospital. The instruments on use, if original, are kind of unique to look at but the rest of the hospital is not unique enough to warrant a visit. I am glad this is only a few minutes drive from an actual WHS else I would have been disappointed to drive all the way from Istanbul for a few displays of mannequins. 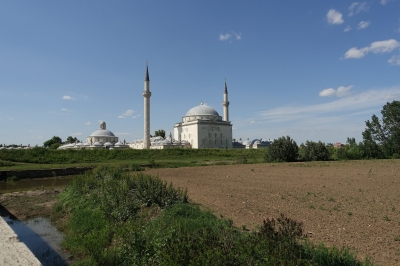 On the outskirts of Edirne you find a former Ottoman medical center, the Sultan Bayezid II Complex. It was founded in the 15th century and operated for 400 years. Nowadays it houses a museum showcasing the training and procedures of Ottoman medicine. Apparently, this was one of the first institutions treating psychological ailments as something other than being possessed by a demon. Or worse.

The site consists of a madrasa, some houses and a large mosque. I felt reminded of a Christian monastery with a clear Ottoman tilt.

The site's focus on Ottoman medicine provides a unique angle that should at least warrant review by Unesco. If the site were added, it wouldn't be one of the great ones, but more one of those niche nominations that are all so common in my native country Germany nowadays.

Personally, I wouldn't mind inscription and I do recommend visiting if you are in Edirne for the Selimiye Mosque. One alternative to inscription as a separate site would be to extend the existing site in Edirne to include the hospital and potentially more sites in the town itself.

See my comments on the Selimiye Mosque for getting to Edirne. From the town center it's a 20min walk to get to the site.