Ancient City of Stratonikeia is part of the Tentative list of Turkey in order to qualify for inclusion in the World Heritage List.

Stratonikeia was a city that developed during the Classic, Hellenistic and Roman Imperial periods. It continued to be important in the Seljuk and Ottoman Periods. Its gymnasium was its most notable building, possible the largest in Antiquity. Gladiators trained here.

Map of Ancient City of Stratonikeia 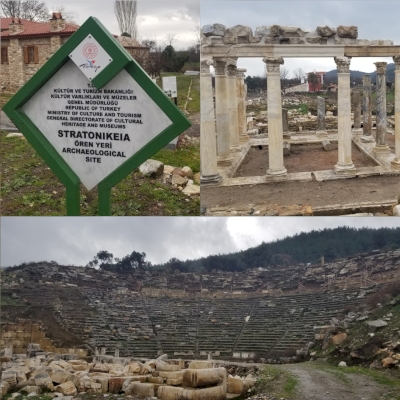 Oh my, this place sucks. I think the only thing it has going for it is that gladiators trained here. There are some remains including a theater with a mudlide making it look rather sad these days, and that's about it for why you came here. It's also littered with farm sheds that should be torn down to preserve the antiquities.

There are some upsides though: in 2021 it got a fancy new ramp from the D-road so you visit it better than the previous mud road, and the only mud you will need to content with are all the poor paths going around the site. It also got new toilets, ticket booth and that mosque was recently renovated but obviously you didn't come for that, it just happened to be here. Speaking of though, it's positioned like it's the highlight of the site but it's barely a century old so there isn't really anything special about it, although that tin minaret is interesting.