Ancient Lavrion is part of the Tentative list of Greece in order to qualify for inclusion in the World Heritage List.

Ancient Lavron is a historic mining area on the Attica Peninsula that stretches from Mount Paneion near Keratea to Cape Sounio on the southern tip. The area was the main centre of silver mining in Greece from the Bronze Age until the 20th century. In the classical period (5th and 4th centuries BC) the exploitation of the mines was an important basis for the rise of Athens to the leading power in Greece. The remains of the ancient mining includes tunnels, kilns, ore washing plants, and cisterns. There are also ruins of secular and religious buildings, such as the Theatre of Thorikos and the Temple of Poseidon in Sounio. 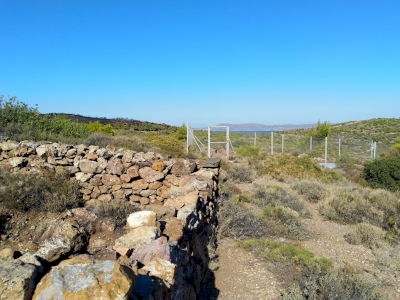 If you like me have ever wondered what made Athens stand out among its contemporary rival Greek city states, Ancient Lavrion may provide the answer. In the hills of the Attika peninsula, roughly 50km South of Athens was a huge mining area where several ores could be mined: copper, lead and most importantly silver. The silver wealth supported the Athenians in resisting the Persian invasions. It also enabled the Athenians to mint their own coins, the Athenian Tetrhadrachmon.

The mines predate classical Greece by millenia. It seems there were mining operations already in neolithic times (3000 BCE). However, after the Peloponnesian War the mines were closed as the infrastructure had been destroyed.

I visited as a day trip from Athens. I came in the afternoon to Cape Sounion where I visited the stunning Poseidon Temple. From there, I hiked into the hills, a bit in hurry due to the scheduling of my bus connection back to Athens. When I made it to the archeological site (or one of these) it was closed. Lucky for me, the whole area is dotted with mines and ruins. So many indeed, that there are plenty of warning signs instructing you not to venture off into the countryside as you may fall into hidden mine shafts etc.

If inscribed as proposed, this would be one of the sites where plenty of visitors can set a tick without being aware that they visited. Cape Sounion with it's Poseidon Temple is a popular excursion from Athens as it's really photogenic. And it's named in the proposal.

OUV-wise, though, the Poseidon temple would not contribute much to the OUV. The main proposition is about prehistoric and classical mining which took place in the hills North of Sounion. Seeing that mining goes back millenia (first operations started in the Bronze Age) and that the area is littered with mines I would favor inscription. If the Greeks ever get around to it.

First things first: Whenever Greek sites have an ancient (archaia) or new (nea) attached to the city name be wary. It means that the old city was abandoned and a new city founded somewhere far off; otherwise the nea part doesn't make much sense. There may be 30km in between either location. For Lavrion, New Lavrion is at least 5km away from the proposed area.

From Athens you can go to Lavrion (East of proposed area) or Sounion (Southern tip) by bus. Busses to Lavrion are more frequent. Most tourists will probably go to Sounion for the Poseidon Temple. It's a 2h bus ride one way along the eastern coast of Attika. You will pass plenty of beach towns. There are multiple pickup points in Athens apart from the KTEL station itself. Easiest is near Syntagma or the Acropolis. Both are shown on google maps. Tickets are sold on the bus.