University City of Bogotá is part of the Tentative list of Colombia in order to qualify for inclusion in the World Heritage List.

The University City of Bogotá was a pioneering university campus project for Latin America that developed since 1936 in the Colombian capital. Its buildings were designed by prominent modernist architects. The general scheme is a result of various projects and proposals developed by two German refugees: teacher Fritz Karsen and architect Leopoldo Rother.

Map of University City of Bogotá 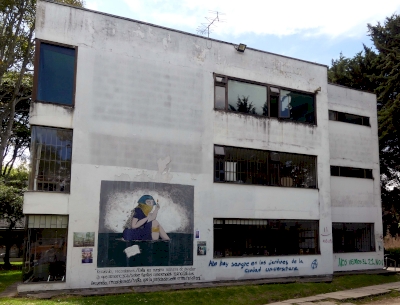 “Ahora, Ciudad Universitaria” we told our taxi driver after a visit to the Virgilio Barco Library. “Cual Entrada?” came the reply. Hmm – I hadn’t planned for that. It appears that the University Campus has at least 5 entrances and our driver wanted to leave us outside one of them. So we asked him to take us to the nearest one (at the Northern side of the Campus). We got out, walked through the gates and were faced by a field of cows and a few very ordinary, even ramshackle, buildings. Perhaps we were at the Agricultural or Veterinarian Faculty? Luckily there was a board with a map and, after hailing a passing student, we got our act together. You need the Calle 26 entrance to get to the heart of the University and its main architecture - such as it is! This is situated at the Southern point of the large campus and would actually be best for reaching by public transport since Bogota’s limited route metro bus system, the Transmilenio, runs along this street and has a stop for the University. This is the street which, renamed “Avenida El Dorado”, goes on out to the airport.

University students had been a bit of a nuisance to us during our Colombian journey, having been a moving force for a series of demonstrations and strikes across the country. They had been joined by groups of Campesinos and Indigenous peoples who had caused the closure of the Pan Americana and the establishment of extra military checkpoints. Even sleepy Popayan had had minor “riots” - and we had had to leave at 5am one day in order to miss them! Travellers we had met who had been in Bogota had found themselves confined to hotel or airport for a day or so and had smelt the tear gas. But now all seemed quiet at the University itself and we passed the smiling security guards with a friendly “Buenas Dias!” – our day sacs weren't even inspected.

The site description submitted to UNESCO by Colombia makes much of the overall coherent plan of the University in what was then (1936) a green field site. OK, so it was an early “Campus University” for Latin America taking its ideas from N America and Europe - but is it that special? The description makes a little dig at Venezuela, pointing out that when they were planning their own University of Caracas in 1944 the architect who eventually carried out that project came to see and study the Bogota example. The result at Caracas of course is a site which gained WHS inscription! “Ipso facto” so should Bogota???

With our visit, we completed the trio of Latin American Universities on the inscribed and T List, having already visited UNAM (Mexico City) and Caracas. As a result, comparisons inevitably had to be made! The initial impression was rather low key – a number of small rectangular buildings of 30’s/40s design, some placed on piloti, sporting corner windows and painted white. All very “Bauhaus”. The UNESCO description says that it provides  - “a simple architecture, clear volumes, without any ornamentation and the elements necessary for the effective delivery of their function, giving the whole structure a rationalistic sense”. That description also mentions the nickname of “Ciudad Blanca”, originally given to the complex of these buildings situated close to the southern entrance. There was indeed a homogeneity which was quite pleasing. However the proposal seems to make a merit out of the heterogeneity which then developed across the campus – “Within the next 10 years the general scheme of the University City would be gradually changed with the appearance of the different buildings. In this process it is possible to establish different construction times”.

We wandered through to the main square entering the “Leopoldo Rother Museum of Architecture” on the way (originally the printing house). This is said to be “considered one of the highest quality buildings within the complex”. Elsewhere we saw a building by Salmona - the architect who designed the Virgilio Barco library. Rother was German/Colombian and Salmona was Colombian – at least it is good that the University showcases its own. This description of an Architectural tour of the University gives an indication of the sorts of buildings on show.

I have just looked up my rating for Caracas University – I gave it 1 star only (having given 3 to UNAM – those iconic murals lifted it I guess in my mind). In my rating system that hardly justifies WHS status at all! Indeed perhaps I should have given Caracas the ultimate low half star of “should not have been inscribed” – as I remember it the Aula Magna was just enough in my mind to raise it above the "ordinary". I certainly couldn't give Bogota any more. Both campuses are worth visiting if you have an interest in architecture and time to spare. I don’t regret the time we spent at Bogota’s campus but the argument of Value accruing from “world trends adapted for a Latin American context” just doesn’t wash in my eyes. Yet – is Caracas any more worthy….?

What WAS of interest as we walked round, were the signs of student protest. A Columbian, and particularly Bogotan, speciality is “Wall Graffiti”. Keep an eye out in the city (there is a tour but it isn’t necessary) and the University had its share - often disfiguring those lovely white walls. Even Che Guevara puts in an appearance – how 60's is that? I suspect that many of these were long term and not related solely to the recent protests (which were actually continuing in low key in the form of various gatherings around the Campus). To represent the University I have chosen a photo which mixes the “Bauhaus” influence with the Columbian wall art!

This site is only about a 20 minute walk away from Bogota's other TWHS, the Virgilio Barco library so in less than half an hour we stood at the gates to the university staring at the stadium and not permitted to go any further. Who knew an entire university could be fenced off and closed by security on a holiday? I'd figured that even if there were no classes we could at least walk around the grounds a little to get a feel for the overall layout but no, we were not going to be able to talk our way in. Walking the perimeter of the university outside the fence leaves you quite far from anything of significance and we weren't able to get any real idea of what the nomination is about. Fortunately we hadn't had high expectations to begin with but for anyone else that might want to check this place out, definitely go on a day when classes are in session.