Historical Monuments of Nigde is part of the Tentative list of Turkey in order to qualify for inclusion in the World Heritage List.

The Historical Monuments of Niğde are located on the Hill of Alaeddin. They date from the Seljuk era. They include Alaeddin Mosque with its geometric stone ornaments and muqarnas, and the Mosque of Sungur Bey.

Map of Historical Monuments of Nigde 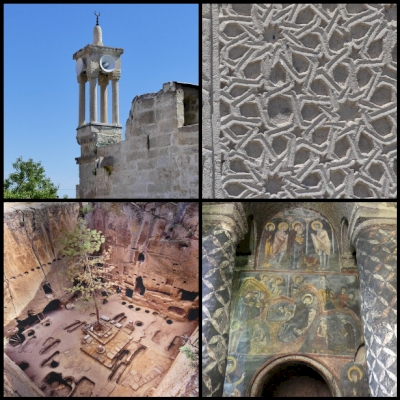 I visited this tWHS in Spring 2021 as a side trip after visiting also the underground city components of the Goreme NP WHS. I think that some interesting sites around Nigde could easily be added as an extension to the Goreme NP WHS but it would be quite far-fetched IMHO to add Nigde as a completely separate WHS.

Nigde in fact is quite an interesting stopover point away from the busiest areas of the Goreme NP. There are several significant monuments that are located on the Hill of Alaeddin signposted everywhere as Nigde Castle, namely the citadel and its iconic tower, the Alaeddin Mosque, the Mosque of Rahmaniye, the Sungur Bey Mosque, the Covered Bazaar of Sokullu Mehmet Paşa, the Nalbantlar Fountain, as well as some Armenian and Greek Churches. Most of the Islamic monuments date back to the Seljuk era but there are far better sites already on the list or on Turkey's tentative list, above all Konya which definitely possesses OUV when compared to Nigde. This nomination seems very weak and only seems to warrant inscription on the basis of criterion (ii) due to first example of Anatolian geometric stone ornamentation on the Eastern Portal of the Alaeddin mosque (top right photo) which is supposed to reflect the first example of ornamentation in Seljukian Architecture. This type of geometric ornamentation is present all over Turkey and eventually would be covered quite well not only by Konya but especially by the 2 tWHS serial nominations of the Seljuk mosques and caravanserais.

What really made up for an overall disappointing visit was our visit to the nearby Byzantine-era cave monastery of Gumusler (bottom photos) which is entirely carved out of a large rock and is one of the best preserved and largest of its kind in the Cappadocia region.