Medieval City of Beçin is part of the Tentative list of Türkiye in order to qualify for inclusion in the World Heritage List.

Beçin is a fortress and settlement with architecture from the 14th and 15th centuries. Notable monuments include the Ahmet Gazi Madrasa, the caravanserai Kizil Han and the large bathhouse Buyuk Hammam.

Map of Medieval City of Beçin 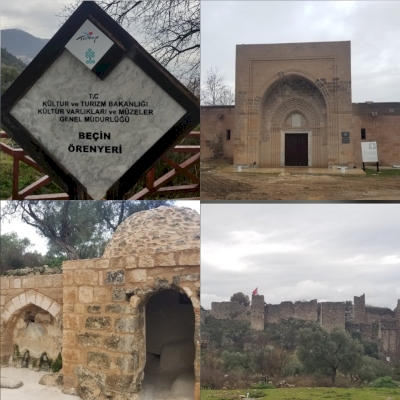 On your way to Bodrum there are several stops, including the fortress city of Beçin. The fort itself is nothing special, just a rundown castle that seems to have lost a lot of history. The site's custodian tagged along to open thr museum and probably out of pure boredom, or just to impress me, but his English was poor and he just pointed out some outer walls that are much older but "I don't know" was used as almost every third sentence. There is ancient well, closed off to visitors, and a modern one with faucet on top of it.

The rest of the town is just walls, and the only one I found interesting was a domed fountain that was having some irrigation channels redone. It also clearly looked renovated.

The "highlight" of the site is the madrasah, the education house, which is now a museum. Clearly not the original building, it now contains tombstones found around the site that are somewhat interesting but nothing unique. The museum tries to educate the visitor about the madrasah with a video (subtitled) and some rather laughable mannequins not unlike other sites in Turkey.

Not worth a visit but if you are in the area and want to check it out, it's cheap and won't take more than an hour - I only recommend not to enter the castle remains because there isn't much to see and the view is the same as from the parking lot. Oh you could of course bring your own flag and hoist it up instead of the massive Turkish one - let's see how that will work out for ya.