Creswell Crags is part of the Tentative list of United Kingdom in order to qualify for inclusion in the World Heritage List. 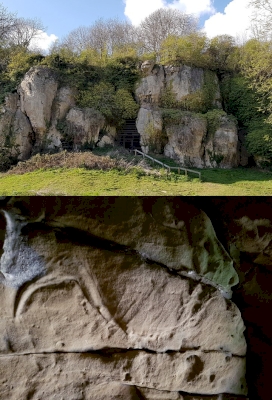 Creswell Crags is a small gorge in England Midlands, with several caves on both North and South edges. Bottom of the gorge was turned into a boating lake by the Lord landowner some hundred years ago. Several artefacts from different prehistoric periods were found into the caves, including rhinos and hippos bones, but also, and most interestingly, evidences of human art : 25 rock art figures and few engraved bones, from last Ice Age (approximately 10 000 years ago). This is the only (so far) known rock art in the British Isles, and it was discovered as recently as 2003, when British scientists launched a countrywide search to identify some.

Visitors centre is new, with all expected facilities from car park to restaurant, shop and information point. It also holds a two-room museum, which most interesting displays are, in my opinion, two of the above-mentioned engraved bones: one with a horse head and one with the figure of a man. The access to the gorge itself is free and by footpaths only, however it is highly advised to have a look at the museum first. Entrances of the different caves can easily be spotted when touring the gorge (in total, the walk is around one mile) but are all closed by grids: you must take part to a guided tour to get inside. In front of our visit in April 2019, we had called and secured a “rock art tour”.

Of the 25 identified rock art carvings, 23 are located in the same tiny cave, and this is where our guide took us. Only few of them are easily visible with the naked eye (scientists had to confirm the other ones by scanning the cave walls): a deer, a mammoth and an ibis. That representation of an ibis indicates that people from that time were already good travellers, and / or were also drawing animal they had been told about, without having necessarily seen them by themselves, showing a more elaborated behaviour than usually associated to “cave men”. Our guide made the best of that cave. She also had pictures of other caves, of which Grotte Chauvet in France, and Hohle Fels Venus (now in Blaubeuren museum), two WHS we had recently visited. This abrupt comparison suddenly blown away any thought about potential inscription of Creswell Crags on the WH List: in my opinion, although interesting and of significant importance in England, Creswell Crags are of much lower standard than the other already inscribed European prehistoric sites. It is however a nice and easy place to visit, just off M1 North/South motorway, and we can say that we enjoyed our visit there.