Voormalige Nazorgkolonie en Sanatorium Zonnestraal has been part of the Tentative list of Netherlands. 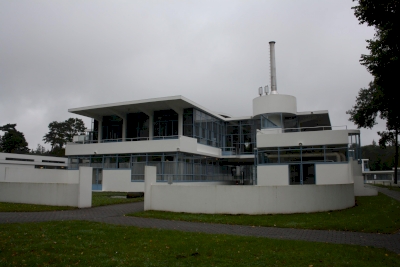 July 2011 - Biketrip in Holland. First Thing we visited after leaving the Train in Hilversum was this marvelous piece of modern Architecture. A great example, sorry it left the tentative list.

It is locacted in the middle of the pagan landscape and pine trees. We made some rounds around the building by bike. Definietly worth visiting when you are in Utrecht anyway. 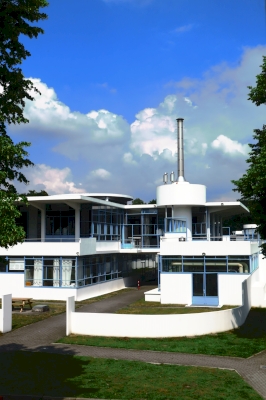 You have to come here on a sunny day else it's pointless - not really, I'm joking, but who would visit a place called "Sunbeam" if it's not! If I would be sick and my mom would tell me "Zoe, they'll place you into the Magic Sunbeam hospital" I would probably mentally cure myself within days of anything! Jokes aside, it was a lovely weekend even though the photo filter I chose makes it looks a little gray. Most people came here to have a stop between their bike tour and enjoy lunch at the cafe. The rest of the sanitarium, oops I mean "Sanatorium" was closed but a few entrance hallways. The place has soooo many windows that you can see everything from the outside. A lovely walk. The architecture is very retro.

There should be a group of sanatoriums established one day with Paimio, Losheng, plus of course the infamous Arkham Asylum ;) Unlike these places, however, Zonnestraal is attempting to inscribe it for an iconic architecture - fair enough, although I would prefer the place then open for a visit and not be like Van Nelle Factory, so perhaps wait until it is not in use anymore or have guided visits on weekends.

The documentation is very old, 1995, and still mentions restoration work. This must have been complete ages ago because there is no sign of restoration or anything that looks out of place.

Edit: so just after writing the review the site was downgraded to "former" tentative which means there are currently no plan to inscribe this. It may come back one day but it is a long process. Seeing that the Netherlands are so compact with places to visit I still recommend a visit. 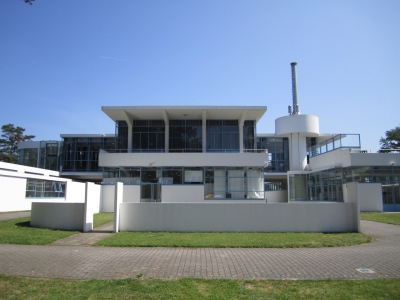 On a beautiful and sunny day in june 2018 I visited Sanatorium Zonnestraal. From my home to this site it is only a hour driving for me, so I decided to go with my car. With public transport (train/bus) it is also posible to visit this site, there is a busstop on the estate.

Sanatorium Zonnestraal was build in the years 1928-1931. The architect was Jan Duiker. The estate is almost 120 hectare and the original sanatorium contains 3 large buildings and some smaller buildings. The years after 1931 they build a lot more on the estate. There is a trail (5km) on the estate and so I hiked along all the buildings.

Zonnestraal was a aftercare institute for TBC patients from the diamond association. For the construction they used only cheap materials such as concrete, steel and glass. The building was build for a lifespan of only 30 years. The idea was that after 30 years there was a medical solution against TBC and then the buildings were no longer needed.

The buildings are nowadays used by some small companies such as a physiotherapist, dentist, fitness, a lunchroom and it is used for seminars. My impression was that Zonnestraal is very poorly maintained. Zonnestraal has been on the tentative list from the Netherlands since 1995. If the Netherlands ever seriously consider proposing Zonnestraal for a nomination, then they need a very good story and also a lot of maintenance is required.

I walked  one and a half hour on the estate. If you want to see only the mainbuildings then 15 minuts is enough.

As the Netherlands are planning to publish an updated Tentative List later this year, I had a second look at the current list. To me it's a rather unimaginative collection of more polders, dunes, terps, fortifications and Roman remains. The average Dutchman will not be familiar with any of them. I would be surprised to see them return on the next list. The best cards hold the historic centre of Amsterdam (up for WHS nomination this year), the Van Nelle Factory and the former Aftercare Colony and 'Sunray' Sanatorium. The latter two are examples of the Dutch Modern Movement.

Sanatorium Zonnestraal ('Sunray') is located in Hilversum, about 35 kms southwest from Amsterdam. The sanatorium was founded by the Amsterdam Diamondworkers Union as an aftercare colony to train tubercular patients for their return to society. It was a revolutionary social experiment, based on occupational therapy. Its nomination for the Tentative List is because of its role in the Dutch branch of the international Modern Movement. Architects Johannes Duiker and Bernard Bijvoet designed the sanatorium in 1925-1927

I visited Zonnestraal on a Sunday morning. It is located on an estate just outside Hilversum, on the edge of the woods. Entrance is free. During my visit I only met a couple of people walking their dogs. There's a trail that leads you along the major monuments.

All these historic buildings have a very open feel, with lots of glass, windows and doors. The materials used were cheap and simple, they only had to last as long as necessary to eliminate tuberculosis (estimated at 30 years). Maintenance works were part of the patients' therapy. Fortunately everything is still standing over 80 years later, although there has been a fire last year at the Ter Meulen Pavillion (on the outside I did not see any serious damage). The complex nowadays is still in use by various private medical organizations.

There's one other sanatorium on the Tentative List, Paimio Sanatorium in Finland. It was completed in 1932 by Finnish architect Alvar Aalto. I have never visited it, but from the description it looks quite similar to Zonnestraal. It might however be preferred for a spot on the World Heritage Liset because of the fame of its architect.

Full Name
Voormalige Nazorgkolonie en Sanatorium Zonnestraal
Country
Netherlands
Added
1995
Withdrawn
2019
Type
Cultural
Categories
You have an error in your SQL syntax; check the manual that corresponds to your MySQL server version for the right syntax to use near ') and (st.tent = 1) group by c.id, c.cat, t.id, t.theme' at line 6