Seville Heritage Park is part of the Tentative list of Jamaica in order to qualify for inclusion in the World Heritage List.

Seville Heritage Park is one of Jamaica's most significant cultural heritage sites and the area is regarded as the genesis of modern Jamaica. During the colonial period of the 16th and 17th centuries, sugar was a major industry, and the core element linking trade between the New World, established European manufacturers, and African slaves. The landscape and architectural remains at Seville Heritage Park are an illustration of this time. 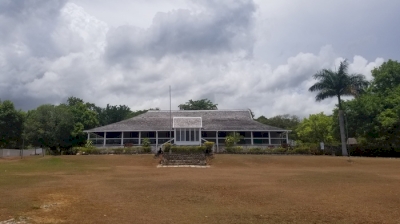 Haven't we got enough sites about colonization, slavery and sugar processing during the 16th to 19th?! Jamaica doesn't have many sites to offer. The mountains are already inscribed so that's basically all of nature, Port Royal will eventually make its way on the list too, and there is Seville, a small historic area in the north. If it weren't next to the touristy Ocho Rios (areas which I tend to avoid but I figured it is safe up there) I wouldn't bother. The visit to the park was brief but hot enough to skip several items. The tour for the house is enough to cover it if you don't like the heat. The site description is actually easier to use as navigation and to know what to look for. The signs post to burial sites and old replica houses but they don't point out the mill etc.

I don't think this is of international value even with the colonial aspect. Jamaican history, yes, world heritage no. I honestly dislike many "colonial" as sites but they tend to always get on the list. There must be something about them that is an easy way to win over the advisory board. Well, not Seville, it got rejected a long time ago and now even still lingering on the list as a revised version (is that even allowed? Any rejected place could simply revise in that case…!)

I had a car so I did bother going but don't waste your money on a tour and do touristy stuff instead. Dunn's River Falls awaits!