Baiheliang Ancient Hydrological Inscription is part of the Tentative list of China in order to qualify for inclusion in the World Heritage List.

Baiheliang (White Crane Ridge) is located in middle of the Changjiang River north to Fuling City, Chongqing. It is submerged under the water all year round and only appears during the low water season of the river in winter. Baiheliang is the earliest low water hydrological inscriptions to be found in China and in the whole world, it also has the longest history of continuity and largest number of records (over about 1200 years). 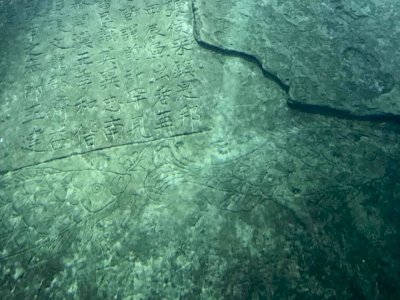 Visisted May 2019. The Baiheliang (White Crane Ridge) Hydrological Inscription is located in the town of Fuling (涪陵) which is conveniently linked with ChongQing – you can go there by train, but no direct buses. The trains depart from ChongQing North and you can end up in Fuling City train station or Fuling North train station. The trip takes between 30 minutes and one hour and a half, depending on the train. To get to the museum where the hydrological inscriptions are kept underwater take a direct bus 119 from Fuling North or bus 102 Fuling city train station to the city centre and change to bus 302. The bus stop is just across the street from the museum.

Believe it or not, but when I got to the museum on Sunday morning, there were no other tourists! As Zoë said most of the informative panels are in Chinease, but now you can get an English audio-guide with pretty detailed information about the rock itself, the inscriptions on it, the fish symbols in the water measuring system and about concept of the museum and its underwater part which looks like fish (of course you will not be able to see it, but there’s no reason not to believe). And another good news is that some people working for the museum do speak English.

As you enter the museum you’ll notice two big multilingual boards stating that “UNESCO supports our heritage” and “Our future world heritage site to be inscribed soon”. Well, does it mean China will nominate it soon? I asked the staff and they told me they started the process of preparing all necessary materials…

After visiting the exposition on the ground level I was taken down the escalator to the underwater part – on the day I was there, it was 27 meters deep below the level of Yangtze (ChangJiang) River – there are electronic panels indicating the depth. Here you must be accompanied by a museum guide. Now you can see the Baiheliang itself! The weather was good and water clear so I could enjoy inscriptions and fish carved on the ridge. The girl guide told me so many about it, even quoting Chines poems written on the rock face – in Chines of course. There’s no any chronological or logical order among more than one hundred of inscriptions; the oldest one is probably from Tang Dynasty, but only inscriptions from Song Dynasty can be first exactly dated.

I spent more than one hour in the museum and must admit that I found it very interesting; if you have no time to go there and want to see some carvings, you can visit Three Gorges Museum in ChongQing where they have some carvings on permanent display. 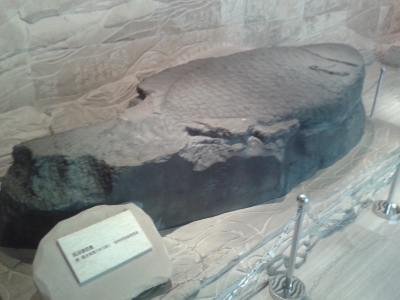 White Crane Ridge calls itself the First Hydrological Station in the world. It served as gauged for measuring low flow years at the river by placing a statue of a fish (or that one single crane it is apparently named after). It is of cultural value.

The best and probably only place to see the stones are that the Baiheliang Underwater Museum in Fuling town, directly at the river. Fuling is a short train ride away from Chongqing which makes this quite convenient to visit. The taxi driver from the station to the hotel says a lot of people come here just for the museum, and indeed the morning already had a lot of people waiting outside but I think most were from one big bus tour.

The museum is visited by only via tour only in Chinese, only has Chinese panel. The start of the museum has a big rock replicate of one of the fish stones below the water (see picture). After a short tour of the floor you can descend an escalator (which only gets switched on when a tour is coming so you cannot go ahead plus a guard will stop you) below the river. On a good day you can actually see the rocks below. Unforunately with pollution rampaging the rivers in China there were no visible rocks when I visited. Everyone basically just walked by the port holes or just took selfies with murky water. The escalator takes you back up and the tour is done.

A little disappointing but I see the unique value here and I suppose my expectations weren't that high either.