Poykent is part of the Tentative list of Uzbekistan in order to qualify for inclusion in the World Heritage List.

Poykent (also included in both serial nominations “Silk Roads Sites in Uzbekistan” and “Silk Roads: Zarafshan-Karakum Corridor” under the name Paikend) are the remain of the largest city of the Bukhara oasis, located at a strategic place connecting the Northern and Southern countries of Central Asia. The site contains remnants of Zoroastrian temples, palace and the mosque, tower and defensive walls, gate, roads and remains of quarters (makhallas). This place was abandoned in the middle 9the century due to the inaccessibility of water. 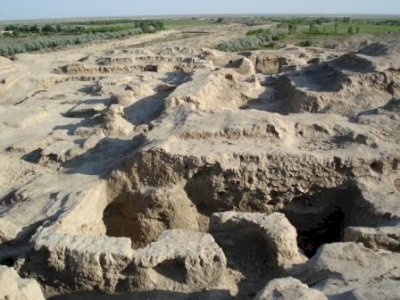 Site visited in April, 2010. It is still on the Tentative list as a separate site but also as a group of monuments to be included as Uzbekistan part of Silk Road. Maybe it is a good idea although it will contain a lot of monuments from different period of times.

Paykent is Sogdian trading place of Silk Road where the paths from Europe (Black Sea through Khorezm) to Fergana Valley and China (Kashgar) as well as to the south: Iran (Khorasan) and India were met. Developed in early medieval period (VI-X centuries), repeatedly conquered, destroyed and rebuilt finally abandoned in XVI century. What is left are modest remnants of a former citadel (the highest part of ruins), town walls (hardly visible) and dwelling houses most of that uncovered by archeologists. The whole area is unfenced and looked completely unprotected. Thanks to building material (mostly adobe) it is similar to any other archeological monuments in Central Asia.

In addition to early medieval ruins there is a descent museum with main excavation findings – red building located some 500 meters from the site - Muzeum of Ancient Paykend History (Qadimgi Paykend Tarixi Muzeyi).

Paykent is located some 50 km from Buchara south west of the town, between Yangimazar and Qorakol, take M37 towards the border with Turkmenistan. The site will be on the left side of the road. There were no marks of the place on the main road, nor in the places nearby.

I took a taxi from Buchara centre for a half day tour. It is important for the driver to know the place. After short negotiations I agree for 40 thousand som (around 20 USD) for a ride, including unlimited waiting time on the spot.

In fact coordinates on our website (and on official UNESCO page) are wrong. The right Google coordinates are: 39.586915, 64.010928, on the map the place is called Drevneye Gorodishche Paykent