Ancient Termiz is part of the Tentative list of Uzbekistan in order to qualify for inclusion in the World Heritage List.

Ancient Termiz (also included in the serial nomination “Silk Roads Sites in Uzbekistan”) is a serial nomination including eleven proprieties around the modern town of Termiz. There are ruins of Buddhist temples (1st to 4th century), Islamic Mausoleums (9 to 16th century) or minaret (12 th century), Greek-Bactrian, Sogdian or Mongol fortifications (3rd BC to 9th century). One monument (Oq-Ostona Bobo) is standing individually on the TWHS, and is 150 km north from Termiz. 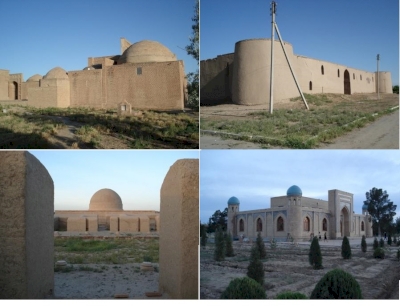 Area rich of historical monuments but traces are scattered in many different places all around the city and in the outskirts. Termez was inhabited from prehistorical times with its heydays during Buddhist era 1-3 century AD. All that ends with the invasion of Genghis Khan troops in 1220, that razed the whole city. Buddhist structures together with other ruins and later rebuilds are the parts of ancient Termez today. More recently Termez was a witness of withdrawal of Russian troops from Afganistan (1989).

Describing all places I will use names from official UNESCO website, with official translations or names that were noticed on the spot. They can be grouped according to the direction:

QORATEPA, or Kara-Tepa, located around 1 km from Fayaztepa, to the south-east, during my visit impossible to reach as it was located near the border with Afganistan (security reasons), visible from Fayaztepa, but I was advised not to take photos. Google coordinates: 37.278321, 67.182692

FAYAZTEPA, or Fayoz-Tepa (Uzbek), 3 rd century Buddhist archeological site, recently beautifully restored with Japanese help (UNESCO/Japan Fund-In-Trust Project), monastery complex with clay stupa with the starcase in the middle. Looks like all buildings were built using clay (adobe). All restored / reconstructed up to around 2 meters from the ground, so full layout of the complex is visible. Google coordinates: 37.286510, 67.187689

ZURMALA MORTAR, or Buddhist Stupa of Zurmala, ruins of Buddhist monument from 1-2 centuries, not restored, if you approach the city from the north it is one of the first visible monuments of ancient Termez, Google coordinates 37.263855, 67.232382

OQ-OSTONA BOBO, or Mausoleum Astana-Baba – the place seems to be located in Turkmenistan, so maybe joint inscription, Google coordinates: 37.906619, 65.109749

As an addition to all those sites there is a good Archeological Museum (descent modern building) with findings from Neanderthal, Stone Age, Bactrian, Sogdian, Khorezm, Kushans or Early Islamic periods. Descriptions also in English. Ideal place to get familiar with history of the whole area.

Practicalities. I took a car (taxi) from the street in Termiz and managed to see the most of Termez places. It is important to specify the places you want to see and the price (depending on the places and waiting time). Most of taxi drivers knows the area and monuments but it is good to have a map on your own. I paid 23 thousand som for full day driving (including waiting time in the monuments) – that time it was around 11 USD.