Archaeological Complex of Pachacamac has been part of the Tentative list of Peru. 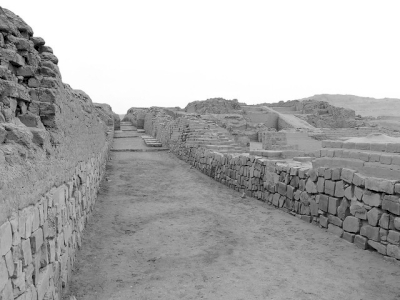 I visited this tentative WHS in June 2019 as a half day trip from Lima. Although the museum isn't large, it has an interesting collection of artefacts, statues and pottery found in the archaeological complex of Pachacamac and it gives you a good overall picture of the ruins. The complex itself is in ruins and at times it can be very hard to tell the mounds and 'adobe pyramid structures' from the sand dunes. The location between sea and desert and overall structure is pretty similar to that of the minor sites around Caral Supe though its state of conservation and overall structure are inferior.

Apart from the Calle Norte-Sur which leads to already inscribed Qhapac Nan location, allow a good 2-3 hours if you want to cover the whole archaeological complex. The structures worth visiting, even if only from the outside (of what's left anyway), are the three pyramids with ramps, the Palacio Taurichumpi, the stone canals covered with slabs, the remains of different walls surrounding the complex, the Acllawasi and last but certainly not least the Templo del Sol which was once covered by a layer of red plaster (still visible but full of graffiti).

The only highlight worth mentioning were the 5 different types of construction from different cultures which made use of the Pachacamac archaeological complex or sanctuary, namely the Adobes Ychma, the Cimientos Lima, the Cimientos Ychma, the Incan Architecture (similar to the foundations and walls in Cusco and elsewhere), and the Adobitos Lima. These can be easily spotted while visiting the different structures of Pachacamac. Nonetheless, these were a far cry from anything unique or possessing OUV so I don't believe this complex should be inscribed (yet again!) on the WH list. 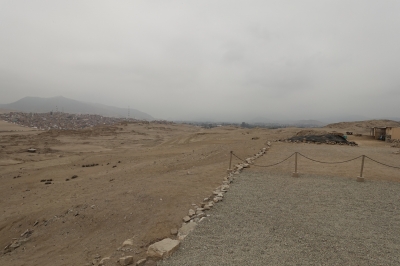 As first stop on my visit to Peru, me and a friend set off to Pachacamac. I wanted to get the vibe of the country and see how public transport works. So I figured venturing 30km South of Lima was a good start.

Pachacamac was a coastal settlement at the end of the Qhapaq Nan. The hill offered a good defensive position and that's also where you find the main part of the ruins. I was somewhat reminded of a Greek Akropolis. The key ingredient for the town, though, seems to have been the wetlands which allowed for agriculture and easy access to water.

Frankly, the site was rather underwhelming. I would not favor inscription on its own. It's still fine as a day trip from Lima, especially if you take one of the collectivos passing through the suburbs. One thing that amazed me, is how much of a desert the area actually is.

In the forum you can find Pauls extensive discussion if Pachacamac is a WHS already, being a component of the Qhapaq Nan. On the one hand side, you would assume large Unesco signs being on display for an inscribed site and the local staff to know about it: There aren't and they dont.

On the other hand side, having walked to the GPS coordinate shown on our map, I also doubt that a random Peruvian neighborhood street would be inscribed just because it follows the historic path. So, who knows. My hunch would be that it's inscribed. But I plan to tick off a few more components before counting Qhapaq Nan as visited.

You need to get to any bus stop (parador) on the Panamericana heading South. Plenty of collectivos will pass through. On the way to the site we hitched a ride to Pachacamac, the city, not the site. We got off in due time, but it would have been easier and faster to take a bus to Lurin, preferably if they are marked Express, i.e. they will stay on the Panamericana till you reach the exit for Lurin. Be warned, traffic in Lima is hell. 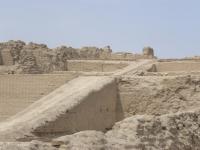 Pachacamac is an easy half-day trip out of Lima. I took one of the dozens of minibuses that leave all the time from Avenida Grau. It dropped me off right at the site's entrance. There's a little museum on site, displaying some pretty Wari ceramics and also textile that has survived the ages due to the extremely dry climate here.

Its location indeed is one of the most remarkable things about Pachacamac - it's out there in the desert, within sight from the sea. The site is totally covered in sand. Archeologists are only slowly making their way to the many temples and other features below. Most of it is off limits to visitors, though the Temple of the Sun can be climbed and other parts like the North-South Street have explanatory boards. You can do a full circuit walk of the large terrain in about an hour (if you have a car, you can also drive).

Pachacamac was a ceremonial and pilgrimage site between 200 and 1535. It was used by different civilizations: the Lima, the Wari, the Ichma and the Inca. For me it is difficult to say if it merits WH status. Its most distinguishing fact is that it predominantly is a Wari site, a culture which is not represented on the List yet. But it's not the best place to see Wari remains - Pachacamac never was a central site for them, and the Inca added and altered a lot.

(P.S.: it might become part of the Qhapaq Nan WHS proposal, as this was one of the special places that the Inca built roads to)

Full Name
Archaeological Complex of Pachacamac
Country
Peru
Added
1996
Withdrawn
2019
Type
Cultural
Categories
You have an error in your SQL syntax; check the manual that corresponds to your MySQL server version for the right syntax to use near ') and (st.tent = 1) group by c.id, c.cat, t.id, t.theme' at line 6