Petroglyphs and Petrographs of the Philippines

Petroglyphs and Petrographs of the Philippines is part of the Tentative list of Philippines in order to qualify for inclusion in the World Heritage List.

Scattered in 5 areas around the Philippine archipelago are the earliest rock art in the country, which dates as far back as late Neolithic Age. The petroglyphs are geometric and anthropomorphic figures found in two areas: one set are engraved on a wall of a rock shelter in Angono, Rizal while the other are carved on a boulder on top of promontories in Alab, Mountain Province. The petrographs are (1) charcoal drawings on cave walls on Peñablaca, Cagayan Province and in Singnapan Caves in Southern Palawan and (2) red hematite handprints in Anda Penisula, Bohol. • Angono Petroglyphs in Angono, Rizal • Alab Petroglyphs in Bontoc, Mountain Province • Peñablanca Petrographs, Cagayan Province • Singnapan Caves, Palawan • Anda Peninsula, Bohol

Map of Petroglyphs and Petrographs of the Philippines 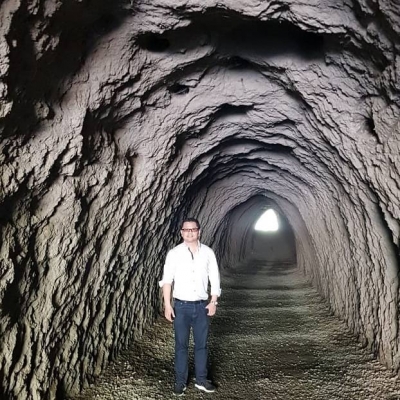 This is where one can see the oldest work of art in the Philippines done 3000 years ago using stone tools.

I visited this site on May 1, 2018 and what normally is a 2 to 3 hour ride from Manila to Angono-Binangonan in Rizal Province took me less than an hour, being a Labor Day holiday.  The Waze app I used was very accurate and I suggest using this because only 5% of the locals have knowledge of this place.  Ninety five percent of the visitors are out-of-townees.

The site is on an elevated area, hilly, and located inside a subdivision which is privately owned.  There are no public transportation inside so one has to walk a few minutes from the entrance to the site.  If you have a private car, there is a parking area beside the tunnel entrance to the petroglyph.

Its a 5-10 minute walk from the man-made tunnel entrance which was a little dark but cool.  There is a mini museum which use to house the artifacts like flake stone tools and obsidian flakes, but has been transferred to the National Museum in Manila.  There are 127 figures consisting of stylized human figures and several animals like lizards and turtles.

Since President Rodrigo Duterte became president, he abolished the entrance fee, so everybody can enter free of charge. The site is well maintained with guards 24/7.  My only suggestion is that the actual petroglyph should be covered or housed because weather elements will surely erase it after 100 years.

One can tour the whole site in an hour. This explains why Angono is the Art Capital of the Philippines producing geniuses like Lucio San Pedro and Botong Francisco.  Their ancestors have been doing art since 3000 years ago.  The site is also on the tentative list of UNESCO World Heritage Sites and I hope this will be accepted by Unesco in the near future.

Considered as the oldest known art work in the Philippines,the Angono Petroglyphs are dated back to 3000BC. The drawings - 127 identified - are carved out from a rock shelter dwelling in the town of Binangonan - some 40 minute drive from Quezon City - in the Province of Rizal. Though highly regarded as a National Cultural Treasure, and one of the four highly endangered sites in the Philippines, this curiosity is not so known even to townsmen. The site isn't big - probably at a length of 50 meters long. Though authentic, there have been hearsays that the materials used in carving the petroglyphs that were found onsite are largely missing already within the National Museum's walls; thus, this might give a hard time in bolstering further the right to claim for a WHS title. Due to limited funds given in the maintenance of the site, the National Museum's satellite office, which is in charge in supervising the site - charges a reasonable fee of 10.00 PhP (.25$) 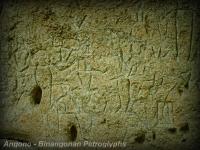 Visited the Angono Petroglyphs last month (June 2011). The site is also referred to as the oldest known artwork in the Philippines.

The site is well-managed: nice landscaping, small but adequate museum facilities, a platform for viewing the petroglyphs.

However, transportation to the site is a little difficult. There's been no report on public transportation so independent travel to the cave area is not really that attractive. I ended up hitchhiking with locals. Other options would be to rent private vehicles.

Another issue would be the buffer zone of the site. A good part of the hill/mountain seems to be located within a private residential village.

All in all, it was a very rewarding experience.

Petroglyphs and Petrographs of the Philippines: Angono Petroglyphs (T)