The Transhumance: The Royal Shepherd's Track

The Transhumance: The Royal Shepherd's Track is part of the Tentative list of Italy in order to qualify for inclusion in the World Heritage List.

The Transhumance: The Royal Shepherd's Track is a network of shepherd's tracks that links wide areas in southern Italy. The tracks are utilised by livestock on the seasonal moves linked to the transhumance, a type of grazing based on the seasonal move of herds between various regions with different climate. As well as the grazing in the Gran Sasso and the Maiella up to Capitanata (Foggia), the archeological area of Sepino is also included.

Map of The Transhumance: The Royal Shepherd's Track 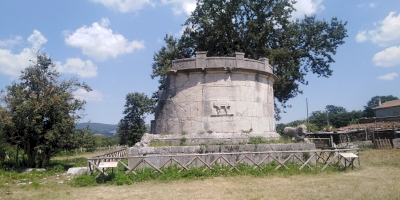 I was staying in the hills near Benevento in August 2020 and it was rather hot to go for hikes, and I found out that Saepinium was not very far. For some reason, the title used for the tentative site reminded me of Murakami's book 'A wild sheep chase'. Alas, in Saepinium, the sheep turned out to be about as elusive as in the book.

The region feels rather remote and deserted and it came as a surprise to see the parking almost full. It seemed there just had been an event, I would expect the place more or less deserted in general. Saepinium is a small Roman town with few remains, most interesting I found the two gates and a grave monument just outside the walls. There is a forum, a basilica and a theatre but all are small and not too impressive. The site itself is free of charge but I paid €3 for the museum, which was not worth the fee and it's three tiny rooms took only a few minutes.

A faded explanation mentioned that a long distance walking trail is planned along the old shepherd tracks but I found no signs indicating the existence of the trail.

The description on the Unesco site states 'The whole set of public works realized during the roman age in this city were connected to the shepherd activities.'  This may be true, but there was nothing in Saepinium to confirm this. While Saepinium made for a nice little outing on a hot afternoon, I could not really make out the connection with transhumance.