Heiligenkreuz Abbey is part of the Tentative list of Austria in order to qualify for inclusion in the World Heritage List.

Heiligenkreuz Abbey was founded in the 12th century and is one of the oldest continuously active and inhabited Cistercian monasteries in the world. Due to numerous modifications and additions over the centuries, the monastery is a combination of Romanesque, Gothic and Baroque components. It reflects the architectural and spiritual development of a Cistercian monastery since the Middle Ages. 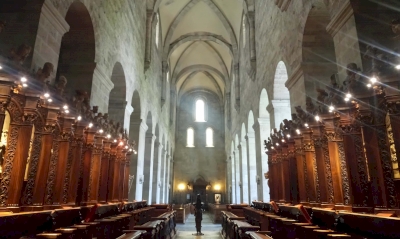 The site is only 15 km from Vienna through the Vienna Woods.

I visited from the former.

The bus will drop you right off at the parking lot for this Abbey. This means that you enter the Abbey complex from the back, but I would recommend entering the Abbey from the front gate in order to orient yourself for this large complex.

Heiligenkreuz has existed without interruption since its founding in 1133 and is the only such Cistercian monastery in the world.

The importance of the Abbey can be felt just by seeing how impeccably well-kept this large monastery is. It already has the aura of a World Heritage Site (and you will most likely know what I mean when you visit), and the aura may be what is important, considering the fact that some World Heritage-listed churches don't have such aura and disappoint non-Christian visitors.

It is also tourist-ready and has tours offered by a monk on the hour 5 to 6 times a day everyday of the year (except on Good Friday and on Christmas Eve).

The tour I took was in German, but the papers in English they gave me at the ticket office offered just about enough info to leave enough time for me to enjoy the beautiful rooms we walked through during this 50-minute tour.

There is also a mini Calvary by the front entrance.  This is not included in the tour, but you can walk up there by yourself, checking out the chapels, to the last stop on the Hill.

The complex also has a very nice restaurant with a large seating area outside. The game meat in the menu seems to come right from the front yard on the same steep Hill where the Calvery is. Initially I just thought they were sheep but was struck upon realizing that they were actually deers.

Since Vienna doesn't seem to be big on church, this may be the place to come, if you need a church fix.  Or if you just want to get away from the perceived high-rises and the crowds of Vienna, a World Heritage in Danger, to the Oasis in the Vienna Woods, as the monks here call Heiligenkreuz.