The Central Slave and Ivory Trade Route is part of the Tentative list of Tanzania in order to qualify for inclusion in the World Heritage List.

The Central Slave and Ivory Trade Route comprises remains of this 19th century trade network at 6 locations. These are Bagamoyo, Mamboya, Mpwapwa, Kilimatinde, Kwihara and Ujiji Bagamoyo. The remains include Arab forts, slave trade related buildings in Stone town, graveyards, churches founded by missionaries who fought against the Slave Trade.

Map of The Central Slave and Ivory Trade Route 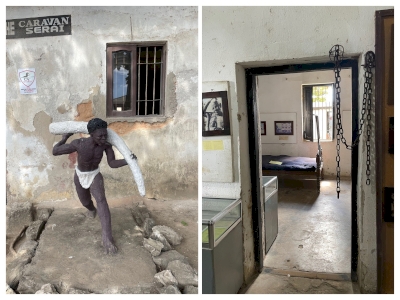 Bagamoyo is one on several sub-sites in the tentative site of “The Central Slave and Ivory Trade Route”. It is now a small town, 1,5 hours north of Dar es Salam. We booked a trip by car with driver through our travel agent.

It is a historical town with ruins of early settlement from 1300 century (Kaole), but the town is more famous for its part in slave trades. This was the end of the Central Slave Route with slaves from the area around Lake Tanganyika, Kongo, Uganda. The journey by foot, chained and with little food and water, lasted up to 6-8 months. Many of them never made it all the way to Bagamoyo. Here they were examined and stored. The strongest were sent to slave market in Zanzibar, the rest to plantations along the shore. In late 1800 the trade was abolished by various countries, but trade was secretly going on until 1920’s when it was totally abolished in Tanganyika.
The abolition of slavery took a long time and had many consequences both for the slaves with no skills and for the plantation owners without their cheap labourers. It is just recently that descendants of slaves were treated with equal rights. They had a long way to go to be accepted, and our guide told us there is still a shame to be offspring of slaves.

We visited the old Caravan Serai Museum. This used to be the house were the traders stayed, now a small museum. The entrance was steep $20 pp for foreigners including the guiding.
It was not much to see really, but there are pictures on the walls telling the story of the route, the traders, and the slaves.

The Roman Catholic mission played an important role in ransoming the slaves and trained them to various skills. The RC mission also has a museum but unfortunately, we didn’t have time to visit. We did have a peek at the church and the avenue of mango trees running from the church to the monument Mission Cross by the sea. It is said that mango trees marked the path trod by the slaves.

The OUV? There is not many remains left to see, but of course the story needs to be told and remembered! But as a WHS-site? We don’t think so, from what we have seen.  According to our travel agent it’s even less to see in the other sites on the Ujiji-Bagamoyo route.