Chalchuapa is part of the Tentative list of El Salvador in order to qualify for inclusion in the World Heritage List.

Chalchuapa comprises multiple pre-Columbian archaeological sites. El Trapiche and Casa Blanca date from the Late Preclassic (400 BC - 200 AD). The Mayan site of Tazumal is the largest. Between 600–900 AD, Tazumal was an important ceremonial complex. It was largely abandoned by 1200, but has since been excavated and partly restored. Two Olmec influed sculptures with engravings have also been found. 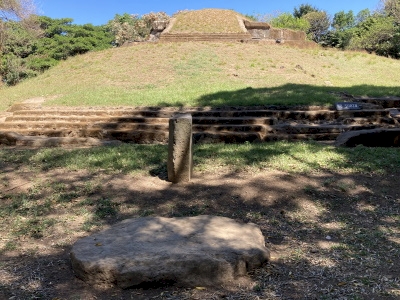 When you visit the Anthropological Museum in San Salvador, you’ll notice that the findings on show there focus on two sites: Joya de Ceren and Tazumal. An eyecatcher that was brought there from Tazumal is a full-size, anthropomorphic sculpture depicting the deity Xipe Totec. Tazumal is part of the Chalchuapa TWHS, named after the town which houses a number of archaeological sites. They are ruins from the Late Preclassic and the Classic Maya period. The place was still lived in when the Spanish arrived in the 16th century.

I started my visit at the Tazumal location. It takes about half an hour to get there on bus 218 from Santa Ana (a bus ticket is a mere 0.32 USD). The entrance fee for foreigners is 5 USD. Like Joya de Ceren, the site looks well-cared for. The small on-site museum has good ceramics.

The most striking thing about the Tazumal ruins is the way they were restored: they were coated with cement in the 1940s and 1950s. It really doesn’t look good, and the concrete has started to wear and tear as well due to heavy rains and tree roots. I did enjoy walking around the site though, as the only visitor on a Wednesday morning. Tazumal is now being further excavated by a Japanese university, there seems still a lot to uncover although most will be hidden under the modern town.

The older site of Casa Blanca lies an easy walkable 1.5 km to the north, still within the limits of Chalchuapa town. It is located in a small forested area, with plentiful birds including the always enchanting motmot.  The visitor experience is similar to Tazumal: a 5 USD entrance fee, a well-looked after site, and a small on-site museum focused on the particular location.

This museum has good explanation panels (also in English), but fewer findings except for a mummified human. The most interesting ruin at Casa Blanca is Structure 5 with a stele and an altar in front of it (pictured). They probably commemorated the end of the construction or another relevant event.

The third location, El Trapiche, lies even further north. I could not find anything substantial on a map, it doesn’t seem to be opened up to visitors like the other two. So I finished off my visit to Chalchuapa with the local snack yuca con chicharron from one of the “yuquerias” that line the street next to Tazumal. 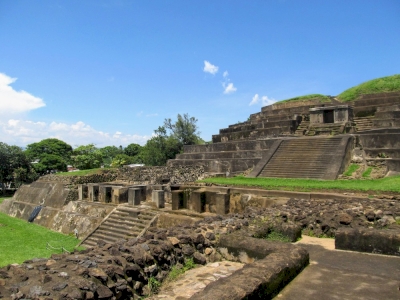 We visited part of this TWHS in the afternoon after visiting Joya de Ceren before returning back to Santa Ana. There are 3 separate zones in town of differing historical periods. We only visited El Tazumal. Somehow this area is far more touristic than Joya de Ceren, with souvenir stalls lining the street in front of the entrance to the small park. There is a small ticket office but the window was shut and the security guard let us through without paying. Locals were picnicking on the grass and resting in the shade while we checked out the small museum and then circumnavigated the restored Mayan temple that is the purpose of the place.

This might be one of the top archaeological sites that El Salvador has to offer but frankly the temple is over restored and compared to the outstanding Mayan sites already on the list, doesn't seem to add anything new that would make it a worthwhile addition. It was a quick visit and we left disappointed and didn't bother going to the other nearby sections.