Tet el Bad (Stone Coffin) is part of the Tentative list of Palau in order to qualify for inclusion in the World Heritage List.

Tet el Bad (Stone Coffin) is a sarcophagus constructed from volcanic andesite rock and demonstrating great skill in carving. The rectangular coffin is located on a stone platform for the chiefs meeting house in Ollei traditional village in northern Palau. The coffin is approximately 2.3 meters long, .6 meters wide, and .4 meters high, with a hollowed out interior and a peaked lid with two knobs. 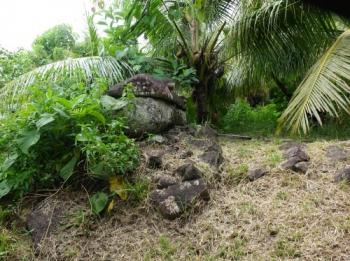 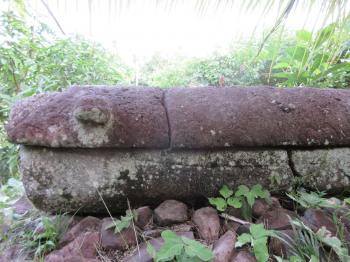 I have an impression that some countries create their tentative WHS lists without taking care of justification and not aiming to really nominate the places for inscription in the future. It seems you be the case with Tet el Bad. The whole place is a small, abandoned stone coffin, located behind the assembly hall of northernmost village on Babeldaob island. It is a solid one hour drive from Koror. I cannot see any outstanding universal values of such an object, especially that it's meaning is not fully researched yet. Surprisingly, very close to the coffin are famous stone monoliths, much nicer and more worthy to visit. Looking from my naive unprofessional perspective, it might be much better to nominate these stones or mix the nomination with Tet el Bad.