The Laponian Area - Tysfjord, the fjord of Hellemobotn and Rago is part of the Tentative list of Norway in order to qualify for inclusion in the World Heritage List. It is a proposed extension of Laponian Area WHS.

Tysfjord, the fjord of Hellemobotn and Rago are three sites in the county of Nordland. The combination of magnificent scenery, ancient cultural landscape and a living Lule Sami settlement beside Hellemofjorden is unique. The area consists of an extensive, unspoilt mountain massif with varied topography, ranging from the high peaks in the northwest to a rounded upland plateau landscape in the east. The Rago national park is contiguous with the Swedish Laponian Area and is dominated by a wild dramatic mountain landscape with deep ravines and great boulders. 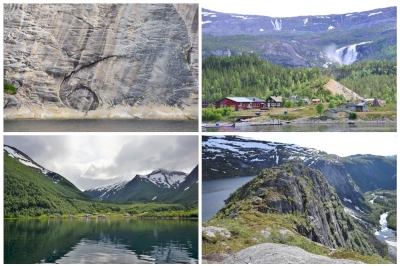 Norwegian landscape is represented on the world heritage list only by West Norwegian fjords. Two tentative sites will try to help this out, The Lofoten Islands and The Norwegian Lapponian Area – Tysfjord, the fjord of Hellemobotn and Rago.

The two parts Tysfjord and Rago are about 50-100 km apart, but both are connected to Padjelanta nation park, a part of the Swedish Lapponian area.

Tysfjord is a fairly large fjord, a wide one. It has a narrow inlet from Vestfjorden and then it widens and is a “palm with five fingers” – or five fjords. The southernmost one is the fjord of Hellemobotn. Here Norway is almost split in two, or you might see it differently – the place where Sweden is closest to the Atlantic (10 km on the ground or 6 km as the crow flies).
The fjord is surrounded by high mountains on all sides, but some narrow strips along the fjord are the homestead of some of the Lule Sami people of Norway. At the end of the fjord is Hellemoboth and from there you can hike to some lookout points and further into Sweden.

A local tale says that when God created earth, on the sixth day (see picture – the 6 mark in the mountainside) he took his hand on to the ground from the ocean and all the way to Hellemobotn. He created the fjord and threw the rocks out to sea, thereby creating Lofoten. The people of Lofoten are not very happy with this tale though.

Rago is a national park further south. The park isn’t very large with it’s 171 km2, but it differs to most other parks. The terrain is rough and unspoilt. Hiking takes you up and down through lush valleys and thundering waterfalls, and even wonderful nature-only quite spots. Together with Padjelanta and further Sarek in Sweden this is the largest coherent wilderness area in Europe. The more coastal climate in Rago differs from the Swedish part and makes it special.

This would be a nice extension to The Laponian Area

Tysfjord is easy to visit by public car ferries, but Hellemobotn is a little bit tricky. The ferry from Drag all the way in to Hellmobotn leaves only once a week (during summer) and return is on the same boat (or a week later). The homestead of Hellemobotn no longer has an all-year population.

In Arran/Drag there is a Lule same museum that tells the story of the norwegian Lule sames.

A visit Rago National parks requires a hike. There is round trip trail (20km) or return the same way. There are also paths that enters Sweden.
There is 4 km from Lakshol to the park “entrance”. There is a bus from nearby Fauske to Lakshol (aprox. 30 km) where you can start hiking. The alternative is car (taxi or private). We arrived by our own car and stayed on the local campsite of Øyra and we opted for hiking the whole circuit (9-10 hours). With bright daylight all night you don't have to worry about getting too late.