Chaukhandi Tombs, Karachi is part of the Tentative list of Pakistan in order to qualify for inclusion in the World Heritage List. 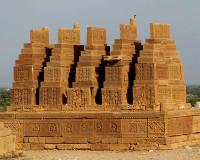 Chaukhandi tombs were our first introduction to Pakistani T List sites but their condition set the tone for much of what was to come. An interesting site of beautifully carved sandstone tombs created by Baluchi tribes-people starting in the 15th C but gradually decaying and becoming overwhelmed by the inexorable spread of Karachi. This newspaper report from 2012 confirms everything we saw. http://archaeologynewsnetwork.blogspot.co.uk/2012/02/archaeologists-provide-glimmer-of-hope.html#.UpGdccQqMwA.

But what about the positives? View these tombs as an introduction to the much grander Makli (around 75kms further east.) in their use of sandstone and in their geometric designs (the stone in fact was quarried from near Makli). Most are “body sized” rectangular tombs though a few are larger with pillars and even a covering dome (photo). All the male tombs have a stylised stone turban carved at the head end – a motif we were to see again and again in the Sufi tombs we visited throughout our tour of Pakistan. There the turbans were of wound rich fabric placed on top of the tomb – and at a Saint’s tomb at Harappa pilgrims left beautiful turbans all along the tomb as a sign of respect. Female tombs were decorated with necklaces etc. Some tombs had carvings of fish and snakes or weapons.

Even if well maintained I wouldn’t have seen these tombs as “WHS material” but they are worth a stopover on the road out to Banbhore and Makli – they are around 25kms out from Karachi centre just past the airport.