Badshahi Mosque, Lahore is part of the Tentative list of Pakistan in order to qualify for inclusion in the World Heritage List.

The Badshahi Mosque in Lahore was built between 1671 and 1673 and is considered one of the most important examples of Indo-Islamic architecture of the Mughal period. It is constructed of red sandstone inlaid with marble and crowned by three white marble domes. The mosque is located adjacent to the Lahore Fort (part of the WHS Fort and Shalamar Gardens) facing the iconic Alamigiri Gate. 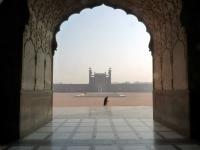 Between 1673 and 1986 the Badshahi Mosque, commissioned by the Mughal emperor Aurangzeb, was the biggest mosque in the world, at which point it was overtaken by Pakistan’s national mosque in Islamabad. It now languishes in 7 place (or even 8th according to some lists)! Mosque “size” seems to be a significant fact to many Muslims - one Pakistani “Morning TV” channel we watched even had a program on this matter and Muslim countries seem to be vying with each other to build ever bigger ones. Algeria is currently spending $1.3 billion to build the world’s 3rd largest, which will overtake other recent structures in Casablanca, Mashad and Jakarta. As the 2 bigger ones will be at Mecca and Medina (both extended in modern times to become so) then 3rd place is presumably regarded as an acceptable objective! But, however far down the list it drops, it will always remain ahead of Delhi’s Jama Masjid completed 17 years earlier by Shah Jahan. Indeed I think the Wiki article on Badshahi must have been written by a Pakistani so insistent is it on the Mosque’s “greatness” when compared with the Taj Mahal – “To appreciate its large size, the four minarets of the Badshahi Mosque are 13.9 ft (4.2 m) taller than those of the Taj Mahal and the main platform of the Taj Mahal can fit inside the 278,784 sq ft (25,899.9 m2) courtyard of the Badshahi Mosque, which is the largest mosque courtyard in the world”!

Mind you, it isn’t always clear how “size” is calculated! Badshahi’s covered area is in fact not that large but its courtyard is enormous. “Maximum number of worshippers” seems to be the normal determining factor (although “total area” comes up with a slightly different ranking) – but even that is unclear. I have seen it written that it can hold 100000 – but also rather lower figures such as 55000. Whatever, it does occasionally get filled on special occasions such as when the Imam of the Grand Mosque in Mecca led the prayers during his visit to Pakistan in 2007 – elsewhere it is said, that “normal” (non Friday) prayers attract c600.

But, as they say, “size isn’t everything”! What of Badshahi as a piece of architecture? In “Pakistan – A Hard Country” (well worth reading by anyone wanting to understand modern Pakistan) Anatol Lieven describes a socially and politically illuminating vignette of an interview with the mosque’s state-appointed imam and describes the mosque as “Pakistan’s greatest and most splendid architectural monument”. He goes on to comment - “In the blaring, stinking, violent world of the modern “third world” Muslim inner city the mosque provides an oasis of calm and reflection. The harmonious serenity of its traditional architecture contrasts with the ugly vulgar clash of Western and Pakistani kitsch …..… the mosque may be the only beautiful work of human creation that most people ever see, and the haven not only of beauty but of an ordered and coherent culture, and a guide to living”. I am not sure I would fully accept either statement but they are both worth considering whilst visiting the site and certainly it was the calm and harmony which I most noticed.

The mosque is situated directly opposite Lahore Fort – in particular, opposite the monumental Alamgiri Gate (Alamgir = “Conqueror of the world”) – undoubtedly a juxtaposition which Aurangzeb intended to convey “meaning”! The close connection of the 2 sites highlights the incompleteness of the Lahore Fort nomination and the strangeness that Badshahi should only be on Pakistan’s T List. The history of this issue is described in the report of the Reactive Monitoring Mission of 2012 to Lahore Fort – “However missions to the property (2003, 2005, 3009) have noted that the Badshahi Masjid and the Tomb of Ranjit Singh, although located outside the fort proper, are an integral part of its physical and historical context and suggested that their inclusion within the inscribed property would enhance its integrity”. The 2012 Mission reduced its objectives simply to getting these 2 structures included within the fort’s buffer zone but appears only to have succeeded with the latter - “The DHoA,P expressed its inability to include the Badshahi Masjid in the buffer zone at this stage because of ownership and management issues that would take an indeterminate amount of time to resolve”.

All this might seem surprising to those of us untutored in the intricacies of Pakistani politics but it tells you so much about the country! If you would like to get a feel for the issues around management of the Mosque have a read of this about the stolen “holy slippers” of Mohammed! http://tribune.com.pk/story/244977/holy-slippers-cleric-bureaucrat-rivalry-plays-out-at-rallies/

(There is apparently a small museum containing relics of Mohammed, his cousin Ali and his daughter Fatimah all donated as recently as the 19th C – but we didn’t visit it)

Leaving aside the theft of its holy relics, the fabric of the Mosque appears to be maintained in reasonably good condition – unlike so much else related to the Walled City (see my review of the T List site of Wazir Khan’s Mosque). The mosque suffered when the Sikhs captured Lahore in 1799 – Ranjit Singh used the courtyard as a stable for his horses. In 1846 the British defeated the Sikhs but continued to use the mosque for military purposes until 1852 when it was returned for religious use and an authority set up to repair and maintain it. A major renovation took place in the 1930s and again after Pakistan’s independence – finishing in 1960. But repair is an almost continuous task and Wiki states that “In 2000, the marble inlay in the Main Prayer Hall was repaired. In 2008, replacement work on the red sandstone tiles on the Mosque's large courtyard commenced, using red sandstone especially imported from the original source near Jaipur and the Mosque is now almost restored to its original 17th century condition”.

The mosque’s internal and external architectural features are very fine – “The interior has rich embellishment in stucco tracery and panelling with a fresco touch, all in bold relief, as well as marble inlay….“The exterior is decorated with stone carving as well as marble inlay on red sandstone”. Perhaps I am too ignorant of such matters but it was the overall impression of the complex rather than its detail which most grabbed me.