Wazir Khans Mosque, Lahore is part of the Tentative list of Pakistan in order to qualify for inclusion in the World Heritage List.

The Wazir Khan Mosque is a 17th century mosque in Lahore, built during the reign of the Mughal Emperor Shah Jahan. The architecture is distinguished by the use of minarets at each of its four corners. The mosque is known for its intricate Kashi-Kari tile work, as well as its interiors that are almost entirely decorated with elaborate frescoes. Wazir Khan Mosque is considered the most ornate mosque from the Mughal period. 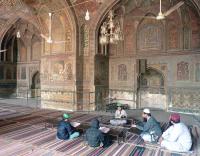 Masjid Wazir Khan is the 2nd Lahori Mosque on Pakistan’s T List. It was constructed in the 1630s during the reign of Shah Jahan around 40 years before the Badshahi. Thus both are examples of “Mughal” architecture - but in almost every other aspect they are significantly different.

Whilst the vast Badshahi sits in isolated splendour opposite the Fort, exuding calmness with its subdued pastel colours, the Wazir Khan mosque is crowded inside the old city and reached from the Delhi Gate through a series of narrow hawker-filled streets. And when you get there it presents a riot of brightly coloured glazed tiles/frescos inside and out. The courtyard is reached via an arcade of shops built into the structure and inside is a space cluttered with tombs and bathing areas – so different from the giant empty space which greets one on entering the Badshahi.

Its justification as a WHS could also be rather different. The Badshahi has only to push against an open door if it wished to go for inscription – UNESCO has made it very clear that they accept its OUV and see it as an essential part of the already inscribed Fort complex if only Pakistan would put together a reasonable case and management plan! However, it is difficult to see Wazir Khan’s mosque gaining inscription either on its own or as an extension to the Fort from which it is separated by a kilometer. It is an essential part of the “Old City” and stands or falls with it. And there lies the rub! Over the years the Old City of Lahore has been allowed to fall into a state of decrepitude. Once-magnificent mansions have been allowed to rot, the demographic of the area has been totally changed by population transfers, and buildings have been used for inappropriate purposes or demolished irrespective of any planning laws. In 2006 the Punjab government commenced a restoration “fight back” with World Bank etc assistance (also now involving the Aga Khan Trust and FDR). In 2102 the “Walled City of Lahore Authority” was set up in effect to “run” the old city. This is a major exercise of heritage rehabilitation by a developing country and perhaps deserves a much higher profile! It will be interesting to see if/how it progresses! These links provide good background and many photos - http://www.walledcitylahore.gop.pk/index.php/the-proj-bg , http://www.skyscrapercity.com/showthread.php?t=1640966

I have seen no formal statement that World Heritage status is an ultimate objective of all this but the attempt by Delhi to become a “World Heritage City” would seem likely to stimulate Pakistan to do the same with Lahore – nothing unites Pakistanis as much as a determination to match/surpass India wherever possible (though their “dislike” of the USA might run it close)! The restoration plan extends to at least 20 years so, if I am correct and the Masjid Wazir Khan would only be nominated as part of a possible nomination of the Walled City, then any action is likely to be many years away. I would also presume that any such nomination would encompass Lahore Fort together with the Badshahi Mosque if that had not previously been added to the Fort inscription.

One aspect of the scheme has been to rehabilitate the 1.6km “Royal Trail” – the route through the Old City which was used by the Shah when arriving from Delhi on his way to the Fort. Phase 1 (of 4) is in progress and goes around 400m from Delhi Gate to Wazir Khan’s Mosque. We could see both the results and the ongoing work during our walk to the mosque. Just on the left after passing through Delhi Gate is the Wazir Khan Hamam (or Shahi Hamam = Royal Bath). The specific owner of this honorific title (Wazir = Vizier/Minister) was court physician to Shah Jahan and rose to be “Subhedar”/“Qadi” (Governor/judge) of Lahore. His activity resulted in him getting 2 buildings named after him! The Hamam is in the middle of its rehabilitation and is well worth visiting to see what is involved in such an exercise! The Mosque which bears his name must have been built over/around the existing subterranean tomb of a 14th C Persian “Pir” (= “Saint”). Until Badshahi was constructed, it acted as the main mosque for the City and would have been used by the Shah for Friday prayers. I am not knowledgeable about Islamic decorative styles but the overall impression both outside and in was very fine. In the prayer chamber beyond the courtyard a group of kids were learning their Quran, thus “completing” the atmosphere! (photo). To see more about the artwork look at its Wiki entry, the “Walled City” site above and - http://cipa.icomos.org/fileadmin/template/doc/PRAGUE/129.pdf