Mattanchery Palace is part of the Tentative list of India in order to qualify for inclusion in the World Heritage List.

Mattanchery Palace in Ernakulam is a 16th century Portuguese colonial palace built as a present for the King of Cochin. It was extended by the Dutch in the 17th century, hence the nickname “Dutch Palace”. The building has a wooden roof and elaborate Kerala-style murals in the tradition of Hindu temple art in its interior. 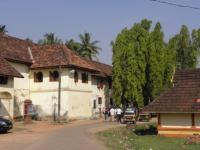