Sigatoka Sand Dunes is part of the Tentative list of Fiji in order to qualify for inclusion in the World Heritage List. 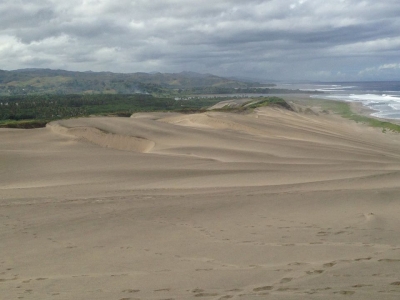 Sigatoka Sand Dunes National park was the first national park ever established in Fiji – and that was in 1989. The park is located on the biggest island of archipelago, Viti Levu, on its south-western part, at the mouth of the Sigatoka River, very close to the town of Sigatoka. It can be easily reached and visited as a day trip from both Nadi and Suva and any other lodge on the southern coast (called Corral Coast) of the Island – there are many buses going in each direction from early morning till late afternoon. The entrance to the park is visible from the road, the green board; you can just tell the driver that you’re heading to the park and you’ll be dropped at this green board. (I suggest doing this and after visiting the dunes to get back to your starting point, go to centre of Sigatoka town and take the bus from there.)

I woke up the man sleeping under the bog tree to buy a ticket and he asked me not to approach to the archaeological dig which was located right at the place where the river enters the ocean; he pointed me the path I should follow, but first encouraged me to read some info about the park (fluvial erosion, unstable ground, parabolic dunes, thousands of years, very old pottery finds, called Lapita ware, 1600 BCE – 500 BCE) and dos and don’ts while in the park (do not leave the path, do not take anything from the shore, take a lot of pictures etc.).  So I followed the path that leads to the dunes.

The park is not very big – you need less than 3 hours to see it all. The dunes, like all the dunes, are difficult to climb, although they are not very high, and the view is not maybe breathtaking but nice, especially the contrast between yellow-grey dunes and the green mahogany forest that was planted in the sixties to halt the dunes’ expansion into the fields and the road. But this site is not about the dunes, and if it is ever nominated, it would be under cultural criteria, as you can read in the short description of the site on UNESCO website: “one of Fiji’s earliest recorded prehistoric sites. Evidence of the past is clearly visible throughout the dune system as pottery scatters, stone tools, human remains and other archaeological relics to be uncovered by natural processes”. I have not seen anything of these, maybe because I was not approaching to the dig, as said by the man at the entrance.

But… you can still see some pottery at the museum in Suva. There is display with at least 6 pieces of pottery from Sigatoka, nicely ornamented. (And do not miss cannibal utensils!)