Abraj Al-Kuwait is part of the Tentative list of Kuwait in order to qualify for inclusion in the World Heritage List.

Abraj Al-Kuwait comprises an iconic water storage and supply system. The water towers are seen as the symbol of Kuwait’s modernization in the 20th century, with rapid economic growth and urbanization. The design is seen as a mix of Arabic culture (shaped like a minaret and with blue mosaics) and Western technology. The concrete towers have retained their original function. 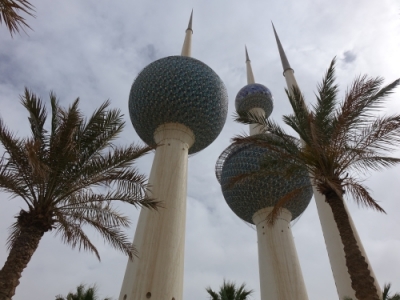 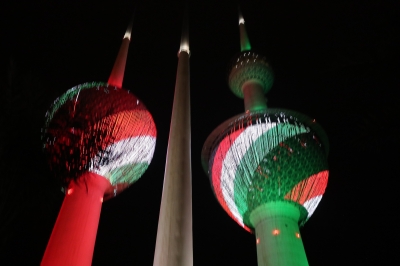 The Kuwait towers belong to the category I like to call "My First UNESCO": nominate anything as a WHS, make semi-sensible OUV description and you will get nominated if your country doesn't have a WHS of its own. I could look at some candidates. But I actually liked Kuwait towers, as they are an artistic and architectural representation of water towers, a structure inherent and important to the country. They were designed and built in seventies, by Swedish architects and Yugoslavian gastarbeiters were used in the making. They're a mix of actual water towers, observatory and restaurant. There's an observation deck open until 11 p.m. and you can get inside at the last moment. The entrance fee is 6 kuwaiti dinars. We enjoyed our visit, though I have to say the best view is of the lit up towers themselves than of the city skyline. 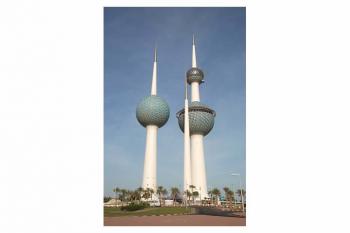 You will see many of the Kuwait Water Towers as you drive around the country, but the tentative site is a group of three slender towers in Kuwait City known as Abraj Al-Kuwait. Aside from walking around the general area, I went up to the viewing sphere, from where you can see the various buildings under construction in Kuwait City. From the water towers, I walked along the waterfront to central Kuwait City, where I visited the fish market (one of the cleanest that I have visited) and Souk Al-Mubarakiya, by far the most interesting area of the capital (but the bar is very low). I ended my day drinking soft drinks at the world's only dry Hard Rock Cafe (it has since closed).