Gombe National Park is part of the Tentative list of Tanzania in order to qualify for inclusion in the World Heritage List.

Gombe National Park is a small park on the eastern shores of Lake Tanganyika. It is best known for its chimpanzees and the behavourial research of them by Jane Goodall. The park has a high level of diversity and its forests feature several other primate species, birds and bushpigs. 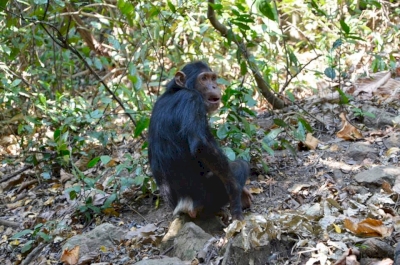 In September 2019, I flew from Bujumbura to Kigoma on the shores of Lake Tanganyika in western Tanzania. My first stop was the Livingstone Memorial in Ujiji, which marks the spot where Henry Morton Stanley found David Livingstone, who had completely lost contact with the outside world for six years, in 1871 and greeted him with the four most well-known words in the history of African exploration: ”Dr. Livingstone, I presume?"  The next morning I traveled by boat for two hours northbound on Lake Tanganyika, the world's longest freshwater lake, from Kigoma to Gombe National Park, which was put on the map by Jane Goodall and her decades-long study of chimpanzees. After several hours of hiking nearly seven miles up and down the park’s valleys, late that afternoon we found a family group that we followed for an hour.  I stayed at Kigoma Hilltop Hotel, the first place I stayed that had resident zebras wandering the property.