Sanmartinian Routes is part of the Tentative list of Argentina in order to qualify for inclusion in the World Heritage List.

The Sanmartinan Routes comprise 7 mountain passes which are associated with the success of the Army of the Andes. In 1817 they were crossed by the multinational troops of Argentinian general San Martin to liberate Chile from the Spanish Empire. The natural values of these mountains also became an object of scientific research, for example by Darwin who retraced the Army’s footsteps in 1835. 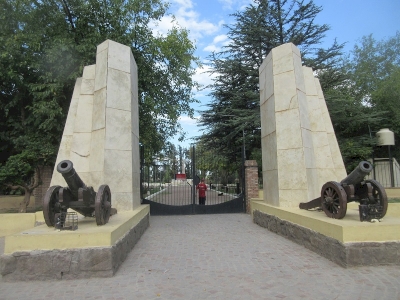 The purpose of this nomination is to commemorate the expedition of General San Martin, who, after forming the Army of the Andes, crossed the mountains to free Chile, this time still belonging to the Spanish Crown. The nomination consists of six passes located high in the Andes, just off the border with Chile, as well as the El Plumerillo camp, located in present Mendoza, where the Army of the Andes was formed. Of the seven locations, I only visited El Plumerillo, which is by far the most easily accessible. There is not much to see there - several soldiers' barracks, period clothing and furnishings, San Martin's room, etc. The flags of Argentina, Chile and Peru - three countries that consider San Martin as a liberator - are waving in the center. After what I've seen, I don't see much chance of inscribing this nomination. The idea of ​​commemorating this expedition does not appeal to me, although perhaps if Chile and Peru were interested in a joint effort, the chances of being included would be bigger. Probably visiting one of the mountain passes would make one look at this nomination with a more favorable eye - Argentina proposed an entry not on cultural, but on mixed criteria, so the extremely spectacular Andes should definitely be its strength.