Farasan Islands Protected Area is part of the Tentative list of Saudi Arabia in order to qualify for inclusion in the World Heritage List.

The Farasan Islands are an archipelago of over 170 coral islands in the Red Sea. The main island is inhabited. They are known for their large population of idmi gazelle, birdlife and marine biodiversity. 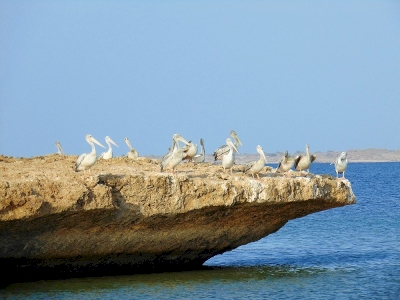 Farasan Islands is the largest archipelago of Saudi Arabia. It can be reached by ferry from Jizan, and the ferries depart twice a day - around 9 a.m. and 1:30 p.m. I knew the ferry was free but had no idea if that included the car as well. It turned out so! This is probably the only place in the world where the two-hour ferry takes tourists with cars free of charge.

Tickets are booked at the headquarters of MACNA (The Maritime Company for Navigation), right by the port of Jizan and it is better to do it at least one day in advance, rather than two hours in advance, as I did with my friend. We had only guaranteed seats for passengers and for the car we were on the waiting list. When asked to the lady selling the tickets whether we had a chance to take the car, we received a sacramental answer - inshallah. Eventually we caught on, but it was close to defeat - only three other cars drove behind us. We had to separate for security checks - the driver and the passengers separately. Each car was x-rayed and the drivers waited in full sun during this operation.

The main island of the archipelago stretches for more than 50 kilometers and its two extreme points are separated by a convenient and wide road. In addition, by car, you can get to the second, slightly smaller island. Both are completely uninteresting - flat as a table, semi-desert, with some pretty nice beaches that you cannot swim - a forbidden activity in Saudi Arabia, at least in the places we've seen. The beaches serve as picnic spots.

The islands are known as a bird sanctuary, but apart from the seagulls, we did not see any other birds, except for one place where very photogenic marabou had gathered - apart from the view of the marina, the only nice view on the Farasan Islands. As I understand, protected area extends to literally the whole archipelago, although I found no reliable maps in the Internet. Anyway, it is difficult to grasp OUV of this site, at least from the main two islands.