Basilica Therma (Sarıkaya Roma Hamamı) is part of the Tentative list of Turkey in order to qualify for inclusion in the World Heritage List.

The Basilica Therma comprises a spa town from the Roman period. It has one outdoor and two indoor hot water pools, directly built on the source of the thermal spring. The spa is still active and can be used via modern buildings. 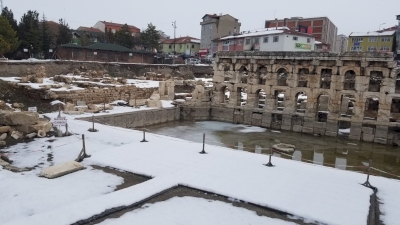 This place is closed in off season but it doesn't matter because you can see everything from the fence. And by everything it's pretty much just the pool of water with the wall you see in every picture. There are many Roman thermal baths in the world and better condition, I think the only difference being that the thermal heating is still used by modern buildings nearby. Can't say that's special enough. Like the previous reviewer I only used it as a stopover better Göreme NP and Hattusha so not really anything lost, but definitely not a highlight worth gunning for. 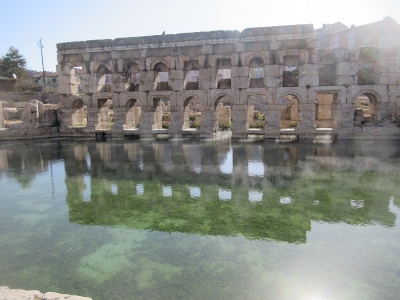 Location of this site makes it a perfect stop on the way from the WHS of Hattusa to Goreme National Park. Basilica Therma is located in the center of small town of Sarikaya, very close to the main road crossing the town. We came there encouraged by photos made at night and indeed it is very nice illuminated. During the day the site is less spectacular – it is in fact quite small archeological area surrounded by modern buildings. It is quite difficult to take a photo without any modern buildings on the second plan. Entering the site requires ticket but honestly you can clearly see all the most important elements from outside.

Basilica Therma was built in 2nd century A.D. and is one of the most important Roman sites in Anatolia. When Christianity came to Anatolia, it served as a baptism site. Then it was used by Seljuks. According to the nomination file, this is the only thermal bath in Asia Minor. Even now water in the largest pool (almost 24x13 meters!) is 45 degrees. I am not sure all this would justify the inscription but the site is certainly worth visiting.