Sitio Arqueológico de la Villa La Isabela is part of the Tentative list of Dominican Republic in order to qualify for inclusion in the World Heritage List.

The archaeological site of Villa La Isabela comprises the remains of the first European settlement in the Americas. It was founded in 1493 during the second voyage of Christopher Columbus. It had a watchtower, shipyard, church and the first residence of Columbus. 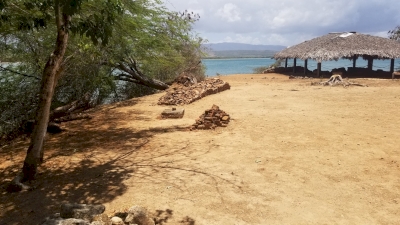 There is lots to see in the Dominican Republic aside from Santo Domingo (I loathe the place but if you just want to tick off a site plus country I can see how it is easy), and many of the tentative place are related to Christopher Columbus. On his third voyage he built himself a house at the northern tip that is nowadays La Isabela. The only house in the Americas apparently - and there is the only unique thing for this place.

Let's start with getting there. It's almost 90 minutes from Puerto Plata and thus almost 2h from the towns further east if that's where you are most likely staying. Having no car in the DR isn't usually an issue to get around because buses go from all the main towns along the main roads but talking to a local I gathered that nobody comes out here to La Isabela. A taxi would cost you a bit more for such a long trip but you could first go to Villa Isabela by bus and continue from there.

I will also mention at this point that the site is not really worth all the trouble but as it appears to gear up an inscription attempt (2020 seems a tad optimistic) many of you might be showing interest nonetheless.

The entrance is a measly 100 pesos and you don't need to hire a guide but I took a guy along who spoke some basic English to show some support to the local community. He says he does this voluntary but I think he means freelance. I only paid him 200 pesos anyway because there is little guidance to be done and he was happy with that.

The first part is outside in the old settlement. A town hall outline, a church, cemetery with Spanish skeletons based on the Catholic prayer stance, all of this is outlined by rocks that aren't part of the original buildings, in other words just history. The last building you get to is covered by a roof. It is Columbus' house. Nice location. Only a few stones are still original here. There are piles of original bricks, rocks and roof tiles shaped by Taino tribesmen's thighs. There is also a sign to the marble area nearby which Columbus named Carrara just like the famous Italian spot in Tuscany. I'm not quite certain but I assume the marble was taken away when the site was abandoned only a few years later.

The second part of the visit is the museum. Once a two building affair it got merged and is a 5 minute breeze-through even if you read all the signs and the general historic info not quite related to the site.

I also want to mention that Columbus building himself a house with slave labor should not be a proud achievement.

As I've said before it is not worth visiting La Isabela and in retrospect I should have done more kitesurfing instead.