Fish Salting and Conservation in Tróia

Roman Production Centre of Fish Salting and Conservation in Tróia is part of the Tentative list of Portugal in order to qualify for inclusion in the World Heritage List.

The Roman fish salting and preservation production centre in Tróia is an archaeological site on a peninsula in the Sado Estuary on the Atlantic coast. Tróia was the largest centre of the fish salting industry known from the Roman Empire. Apart from the fish processing facilities, remains of the settlement have also been preserved, such as the ruins of a basilica, thermal baths, a mausoleum and several necropolises.

Map of Fish Salting and Conservation in Tróia 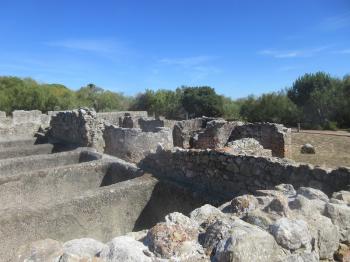 The site is located at the top of Tróia Peninsula and can be reached either by land (around 20-30 km detour from highway Lisbon - Faro) or by ferry from Setubal – ferry terminal is quite near the site, although taking a taxi might be necessary.

The site is a complex of ruins built at the beginning of 1st century AD and occupied until 6th century. It served mainly as a fish-salting production complex but it had many accompanying buildings, such as baths, mausoleum or cemetery.

The fish-salting workshops are quite well preserved and mainly comprise of several tanks, where fish was stored and salted. After finishing the process, the fish products (including fish sauce) were packed to amphorae and transported to other parts of the Roman Empire. The bath area and the mausoleum also survived quite well, but overall the ruins are rather small and half an hour visit may be more than enough.

The ruins are quite nice and worth a detour, although I could not see outstanding universal value of this site (although I am not aware of any other sites connected with ancient fish salting industry, so maybe this makes it unique and justifies placing on T-List).