Haci Bayram Mosque and its Surrounding Area (the Haci Bayram District) is part of the Tentative list of Turkey in order to qualify for inclusion in the World Heritage List.

Haci Bayram Mosque is a leading mosque in Ankara from the 15th century. It represents the Bayrami Sufi order and was named after its founder. The site includes a Roman Temple of Augustus, Bayram’s tomb and the surrounding neigbourhood. 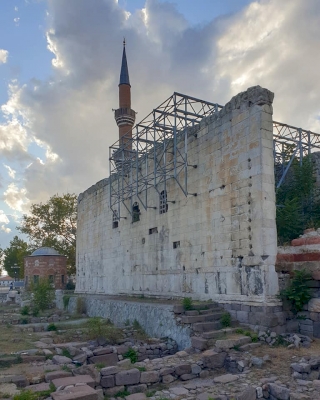 Turkey still has some World Heritage status worthy entries on its T-list. But what is probably bothering Turkish politicians, is the fact that Turkey's capital is plain boring when it comes to historical sights (or any sights actually). How to get a World Heritage site to Ankara? Haci Bayram district is Ankara's best attempt. Haci Bayram-i Veli Camii is a small mosque dedicated to a Sufi poet Haci Bayram-i Veli. His tomb is next to the mosque and it's very busy with Turkish worshippers. From the outside the mosque looks old, as it is, but the inside it has been renovated clearly a lot. Original mosque is from the 15th century but the famous Mimar Sinan restored the mosque in the next century. The interior has some nice tiles and wooden decor but the modern green lighting inside gives it a weird party vibe... If you've seen any other historical mosque in Turkey, there is literally nothing new or interesting for you here.

More interesting are the ruins of a Roman temple located right next to the mosque. Temple of Augustus and Rome in Ancyra has still some walls standing which give you a clear image how this temple looked back in the Roman times. It is also the place where the best surviving copies of emperor Augustus' funerary inscriptions were found. But generally it is just a small Roman archeological site. Around the mosque and the temple ruins the neighbourhood has been turned into a some kind of a faux-Ottoman village with cafés, restaurants and religious book stores. During the weekends lots of domestic tourists visit this place.

The nomination also includes early 20th century (mostly) governmental buildings of the Ulus district down the hill from the mosque. These buildings have nothing special on them. The streets look more European (like Paris or Berlin with little Turkish tiling here and there) but that doesn't make these buildings WH worthy and the connection between these buildings and the Haci Bayram Mosque is a question mark. Hidden behind the buildings is the Column of Julianus, erected in honor of the Roman emperor Julian the Apostate's visit to Ankara in 362. There's usually a stork's nest on top of the column.

I'm afraid to say that Ankara might need to wait for a while until it gets its first WH site (or very likely it won't get any). Ankara also has one other TWHS, part of the Anatolian wooden mosques serial nomination, which has a better chance to get inscribed. Maybe Atatürk's massive mausoleum Anitkabir will be one day up for nomination.