Vespasianus Titus Tunnel is part of the Tentative list of Turkey in order to qualify for inclusion in the World Heritage List.

The Vespasianus Titus Tunnel was a Roman construction near the antique city of Seleuceia Pieria. It is 875m in length and was used to divert flood waters and transport water into the city. Bridges and cisterns completed the tunnel complex. It was carved out of the rocks by manpower only on the orders of the Roman emperor Vespasian (who reigned 69–79 AD). 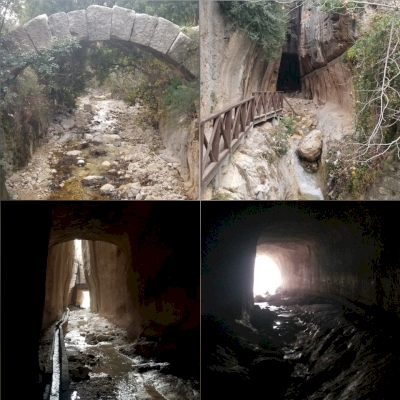 If anyone wants to persuade me that this should get thumbs up I'm all for it, because ever since checking into what the Titus Tunnel was I really wanted to go. I made sure to take a trip down the Turkish "Florida" as I call the little section to the south, even though it's nothing like Florida but maybe on a map, and the last half an hour of driving through small suburbs wasn't fun either. However, people here were super friendly everywhere, and the trip to the tunnel didn't disappoint.

I almost missed the small ramp to the entrance, then there is some sort of parking lot up there that might fill up in summer but you can easily walk up from the main road if necessary. The entrance is super cheap and then you start a small 10min hike to the tunnel. When you get to the entrance you can also go to a nearby cave but I didn't bother. The top left of pic is actually still a footbridge across used by villagers.

It then becomes clear that this isn't an easy visit. I even met an elderly couple when leaving and wanted to warn them about it but, well, let them see for themselves. There is a small wooden boardwalk that enters the tunnel and then you are on your own to get across rocks and water that flows inside. The start is probably the toughest part as eventually you'll be able to hoist up to small (modern) aqueduct that enables walking along the side (see bottom left pic). It's still not the easiest of paths though, and eventually it gets dark so you need to switch on your flashlight. I stopped when it got very dark which is the picture at the bottom right, and yes there is light beyond and I was curious about what it's like back there but the path became slippery from the water and I didn't feel safe with my trainers. It's also kinda annoying when other people are in the narrow tunnel - very, very annoying.

Thus, quite a fun visit but I haven't even talked about the origins of the tunnel. It took 3 Roman emperors (or more?) to build. I gather now that there are 3 important things to find here: I dig Romans digging tunnels, b) Romans got shit done across successions and not like this Dems/GOP switcheroo that shows quite the opposite, and 3) this tunnel is super useful. I'm sure the guy washing his spring onions in the aquaduct thanks Big T. for the tunnel.

The only probably is, I'm not entirely convinced its world heritage material.